TALKING AND WALKING OUR WAY BACK: THE ROUTE 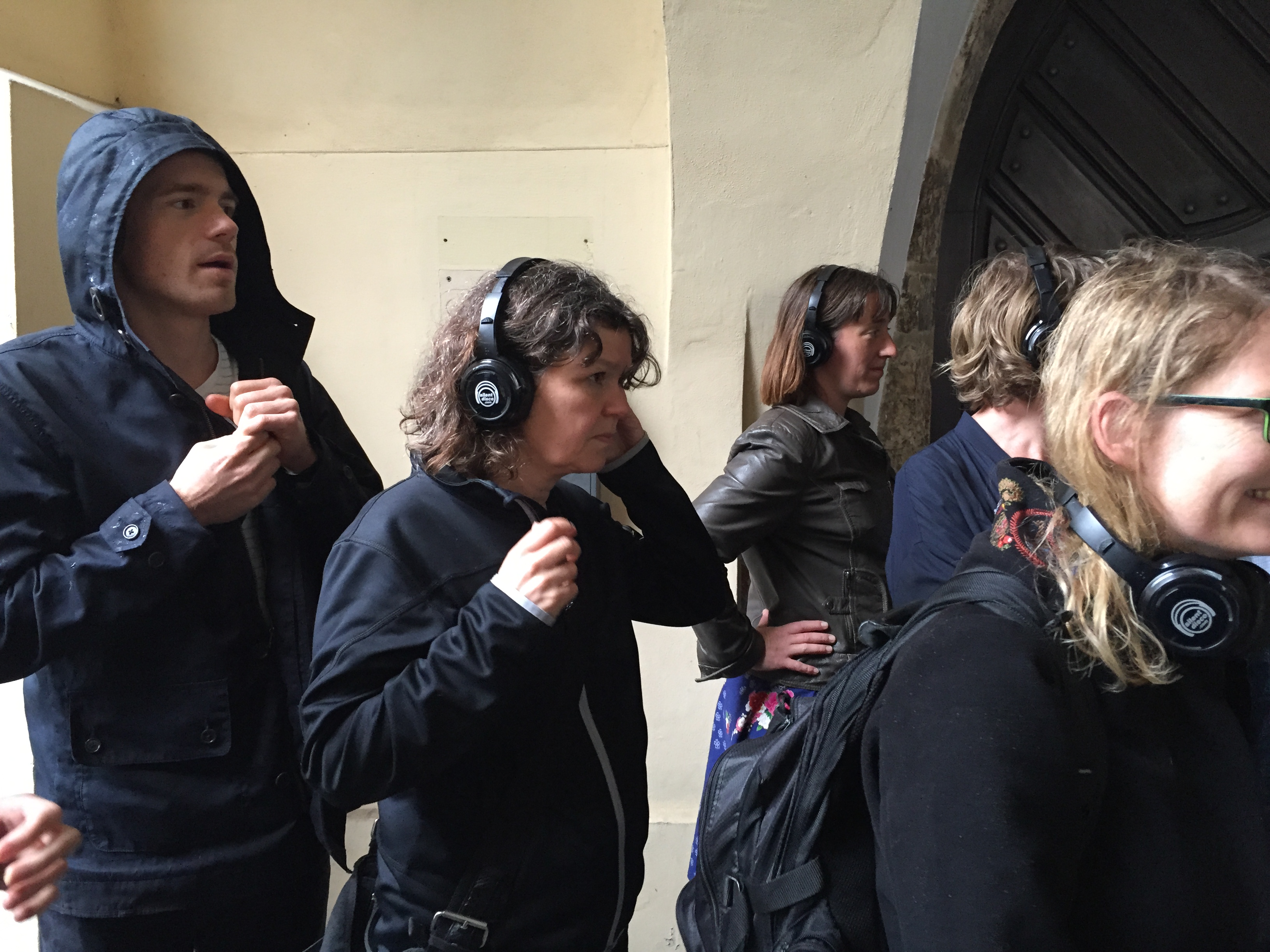 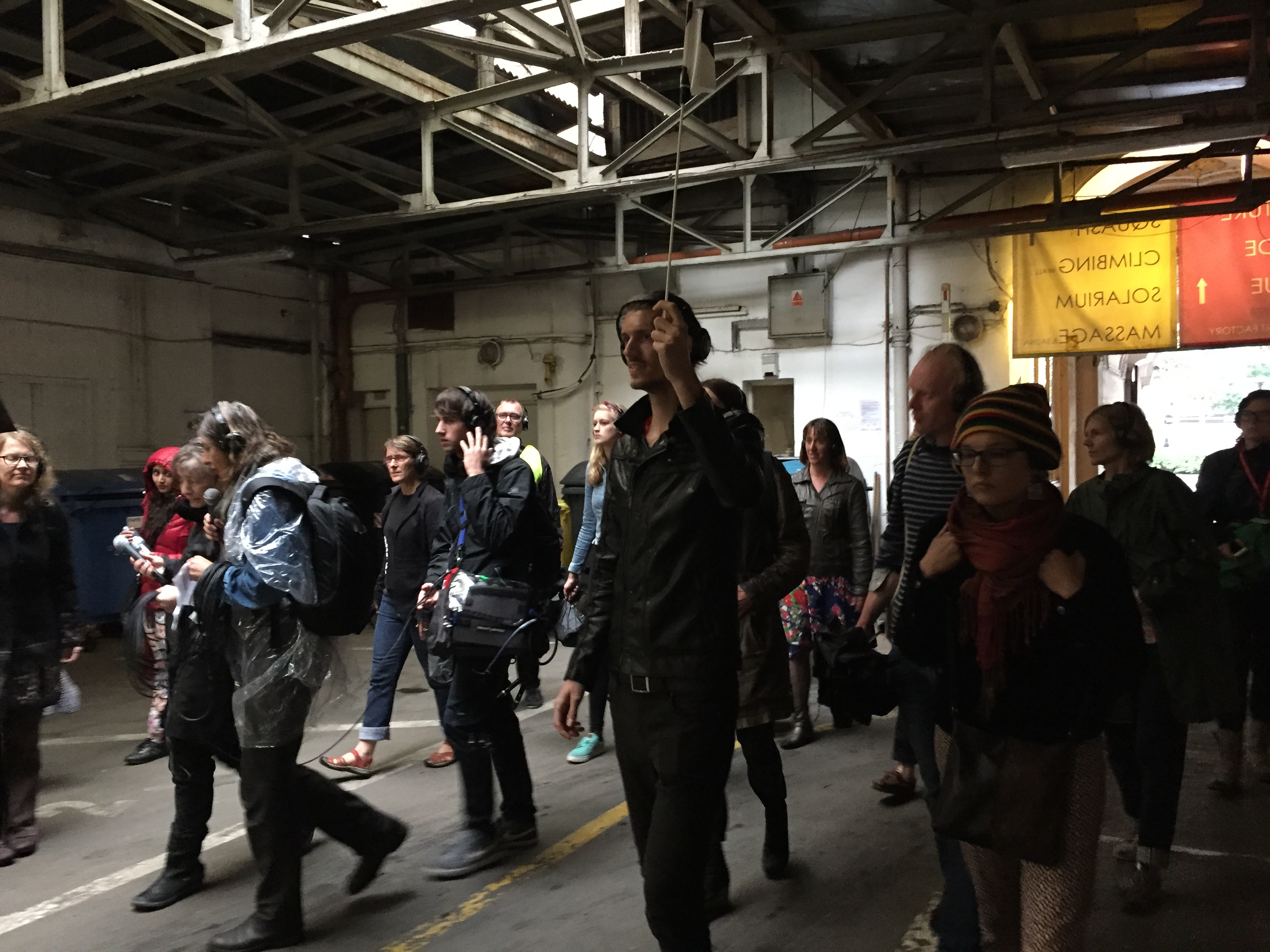 It was in the early days of dreaming about our Prague Operation. We were still projecting this whole realm of ideas and possibilities into the future and thought, among other things, about the need to deliberate, discuss and reflect on all the unforseen things what would most certainly occur. We wanted a way of meeting and sharing information that really fitted in with the whole operation. To explore a city and then go back to some conference room to talk about it all – no thank you. We had to find a format that was more relevant, more appropriate, and scenographic in itself. And suddenly we hit on a strong idea: us together in an invisible bubble in the middle of a swarming crowd. That way, we could hold intense talks with each other, fully focussed but without leaving the stage: we’d still be part of the city’s dynamics.

We decided to take the ‘silent disco-tool’ to Prague. In silent disco, people dance together but to their own music, all  wearing headphones. And then the idea started to grow – what if we didn’t just position ourselves inbetween but were able to merge with the crowd? Being part of the masses, dragged along by them, cutting ourselves loose, getting away, hiding somewhere, diving back in; or, negotiate, surrender, fight, flee, shelter and surrender again… A talk and a walk at the same time.

So off we went. A group of people, tracking a tall guy with a flag: like the usual bunch of tourists. But with a strange choreography: banding together closely at certain points, veering off individually at another. A strange tribe on a city stroll. We walked along the ant trail (the continous stream of tourists between the common touristic highlights of Prague), broke out, chased through backstreets, went underneath arcades, strolled through parking garages (where we were cut off by an official) and shopping malls. We took short cuts and made detours. When it rained, we took shelter on some god forsaken cafe terrace – without ordering anything or sitting down. At last, we even took the subway.

In the meantime, people were talking. Talks on scenography, on space, on urbanism. Is it possible to talk and walk? Or, even listen and walk? Can your ears and eyes be equally alert or is one of them always stronger? Can you focus? Do you still take in all the details of what is going on around you, of what is being said? What happens to your sense of space? To the way you walk? How do you respond to the surroundings?

As it turns out, it’s not easy. Most people merely listen; they tell us that it was all very ‘different’ and special, but  that they missed most of what was to be seen along the way. (Which really is a pity, because our walks were meticulously composed) Others had stronger visual needs and unfortunately missed out on the conversation… The focus though is strongly on those who actually talk; there isn’t any interruption from people in the audience. Satisfying to know and surprisingly enough, no one told us afterwards that they missed this opportunity, probably also because everybody had the chance to talk to one another personally before and after the walk and talk.
There was widely shared feeling of profound intimacy. The speakers talked to each other  in a completely different way then they would have done in a lecture hall, more personal, more loose, more open, more spontaneous. On the other hand, as listeners you tend to feel very close to the voices in your ear, even without seeing the people they actually belong to. The freedom to wander off, leave the group and walk on the other side of the street or just hang on the periphery is very pleasing. Some even mention the feeling of being invisible – with the headphones functioning like  Harry Potter’s cloak. Of course there is also the act of walking itself, adding impact to what is been said.

So, is this the new way to do conferences? Well… the concept might need some editing, some adjustments. But it did set the stage for a special experience. And setting the stage – isn’t that what scenography is all about?