TALKING AND WALKING OUR WAY BACK: THE LECTURE HALL 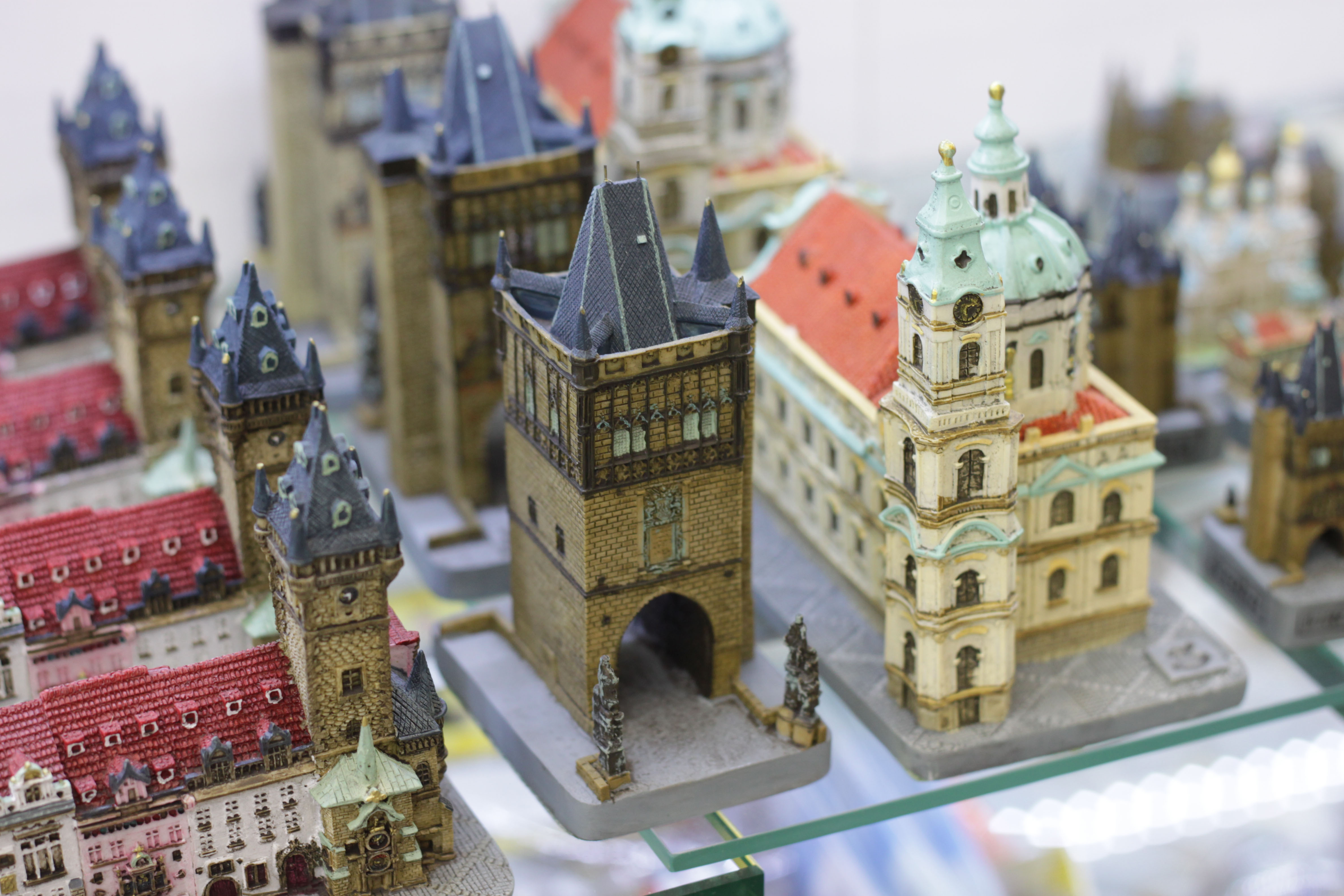 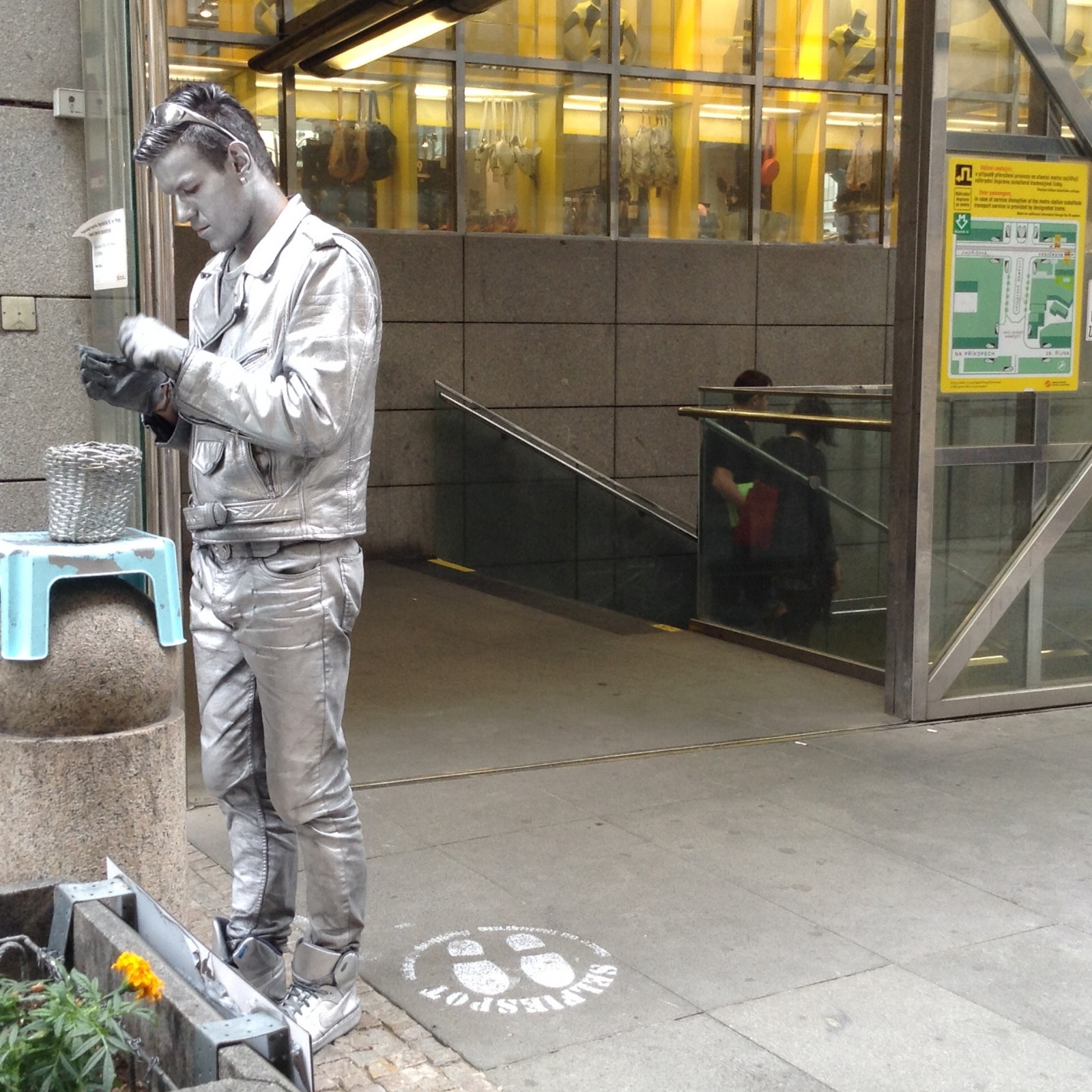 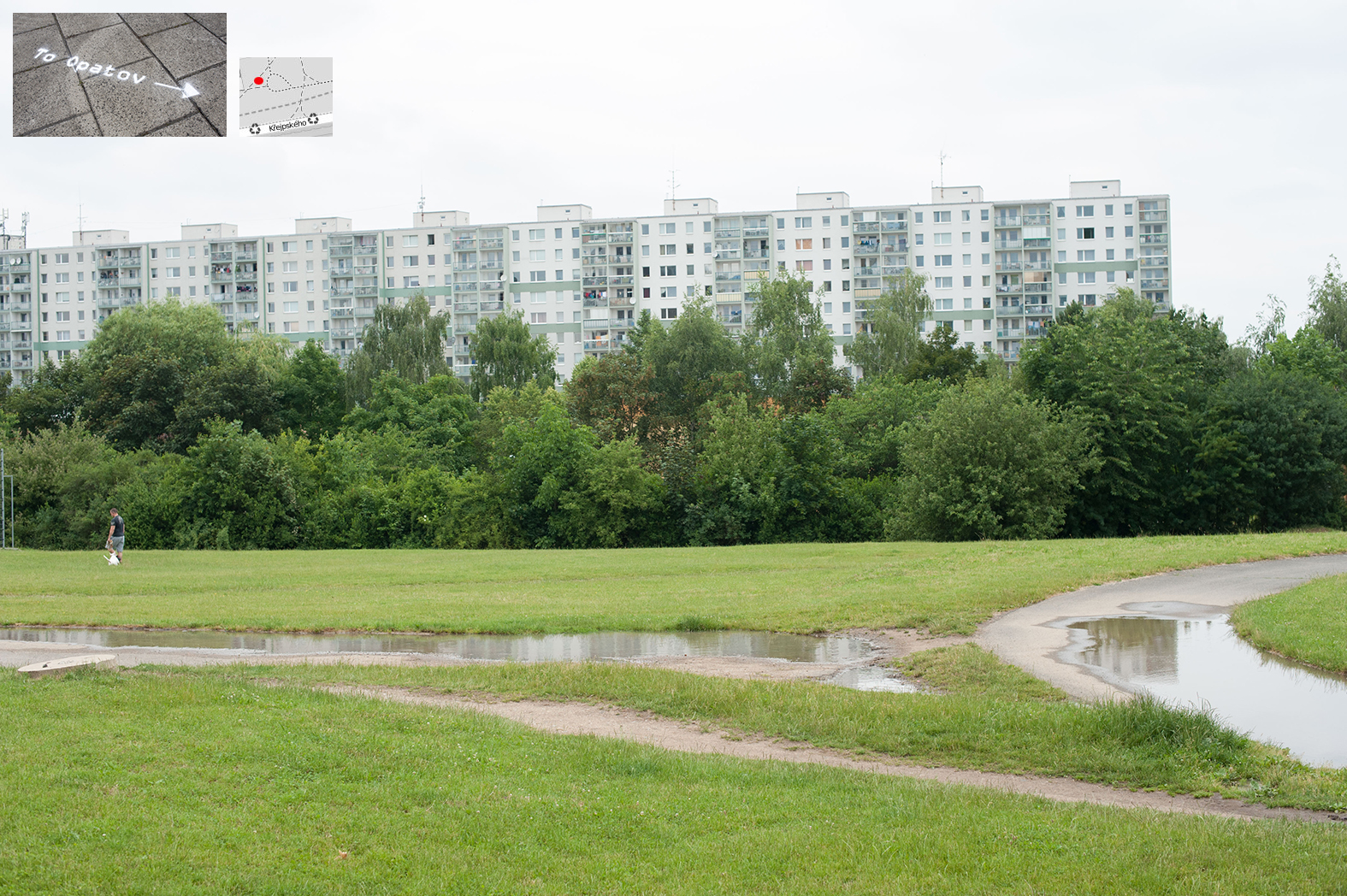 Hieke Pars pointed to Opatov, a suburb at the outskirts from Prague 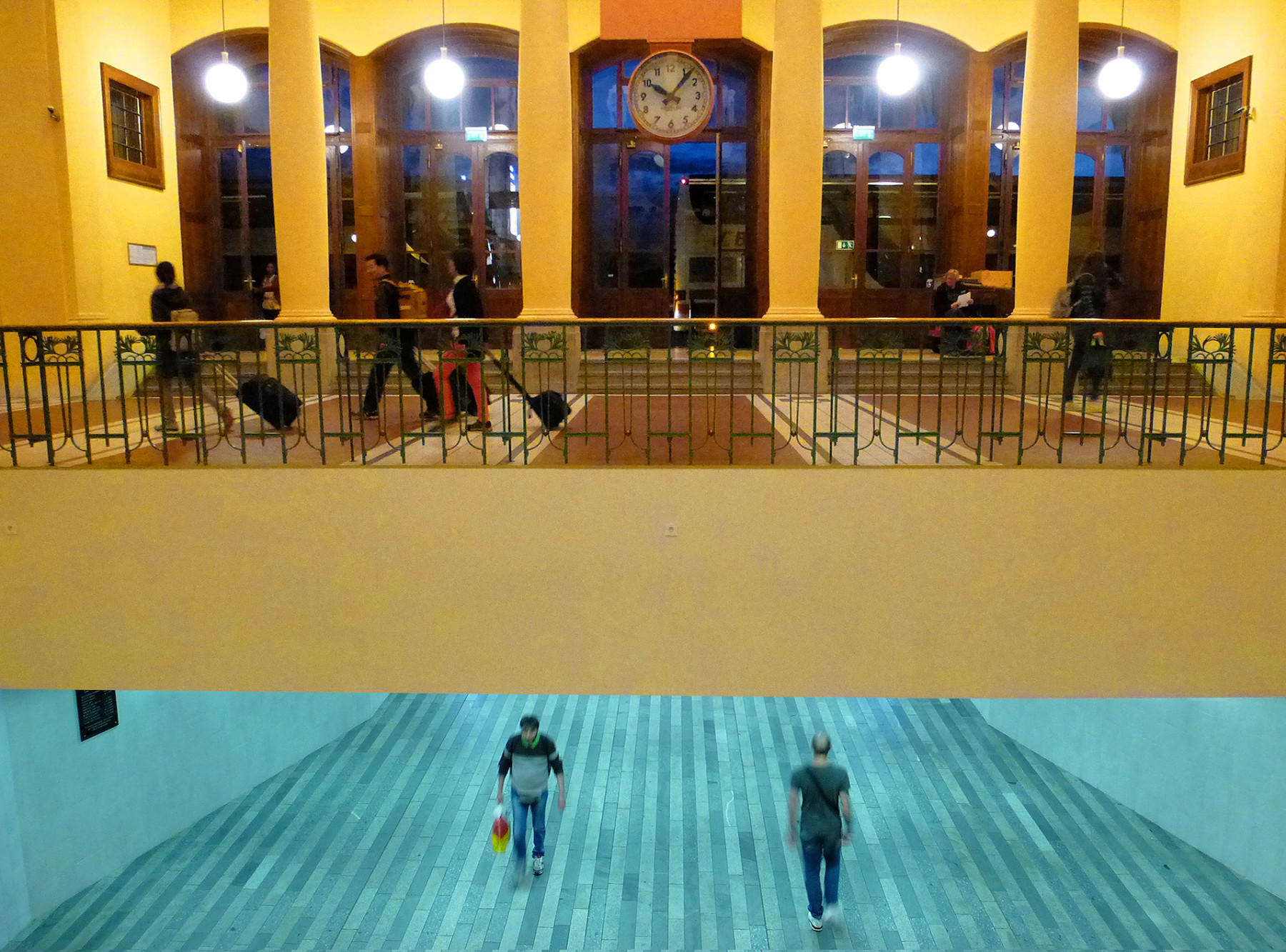 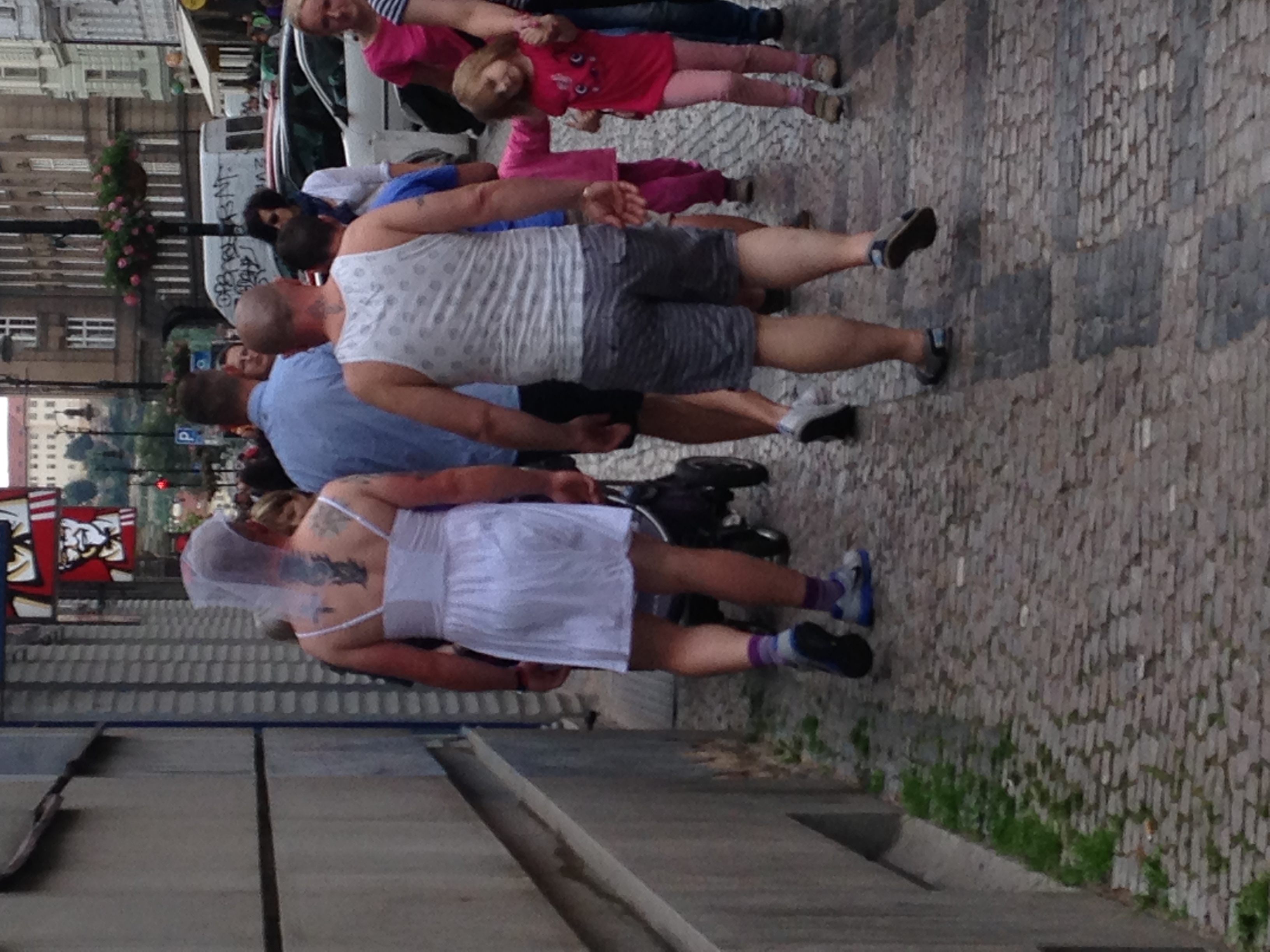 Carly Everaert created conditions to end up in unknown territory 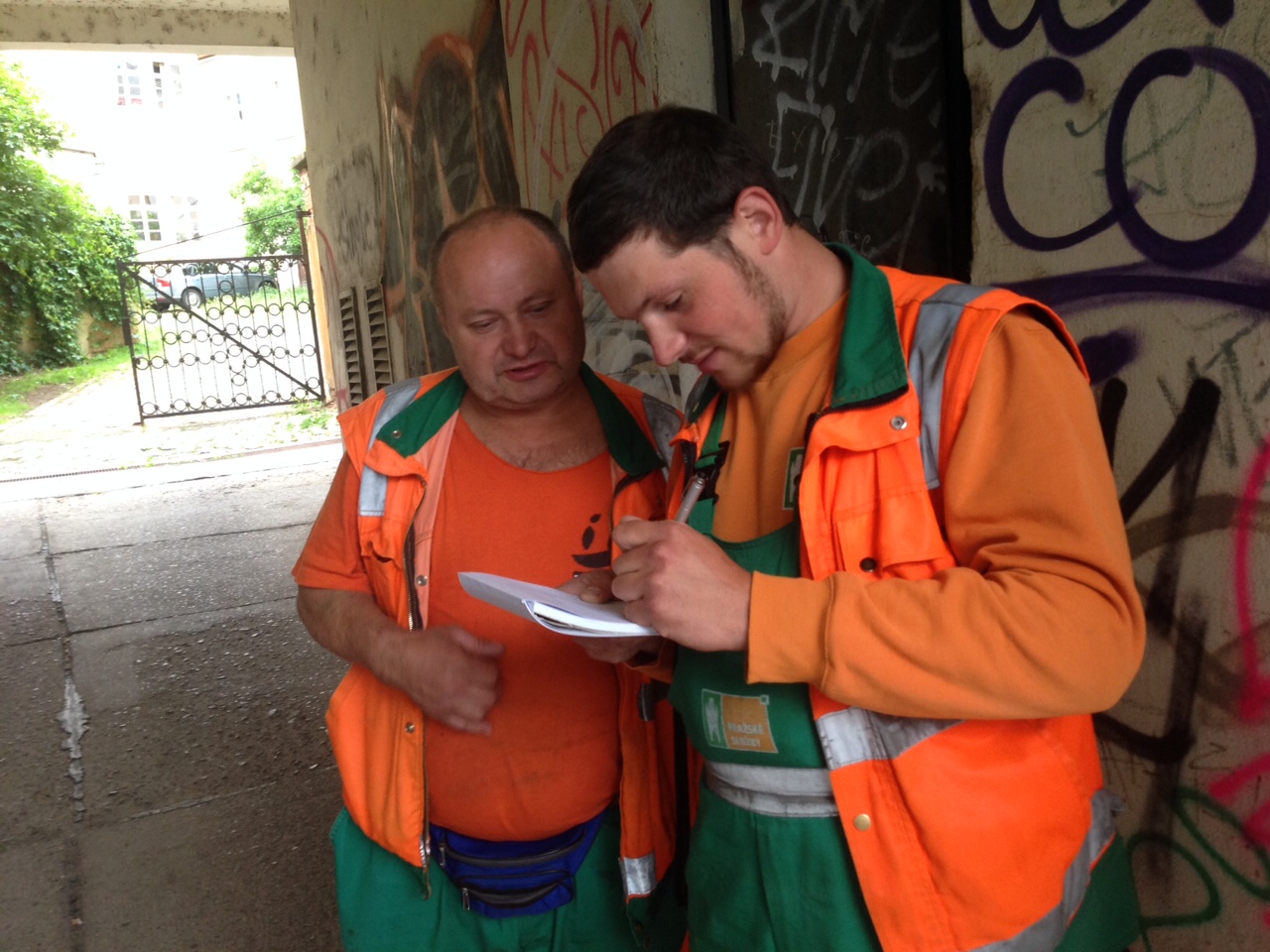 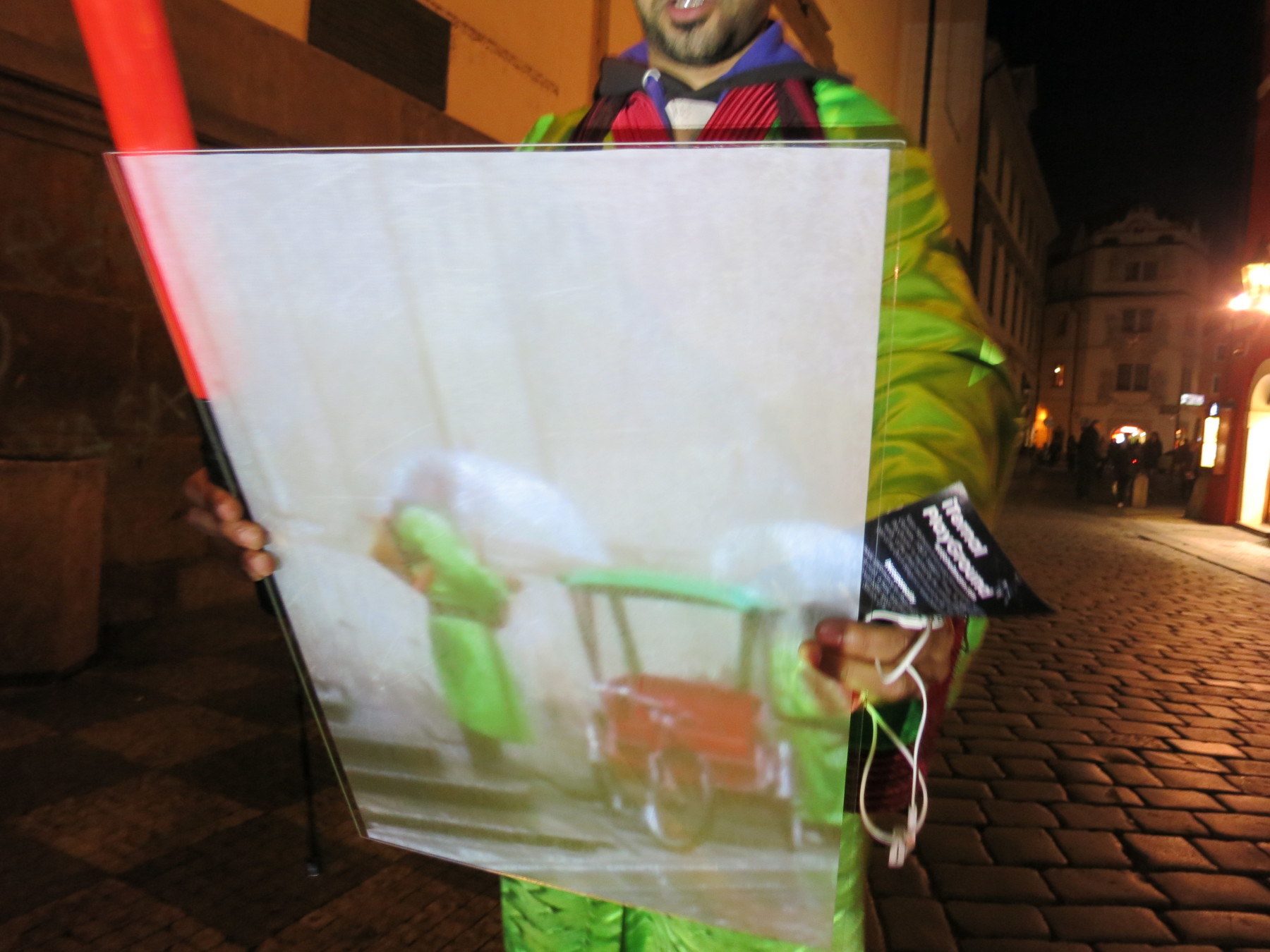 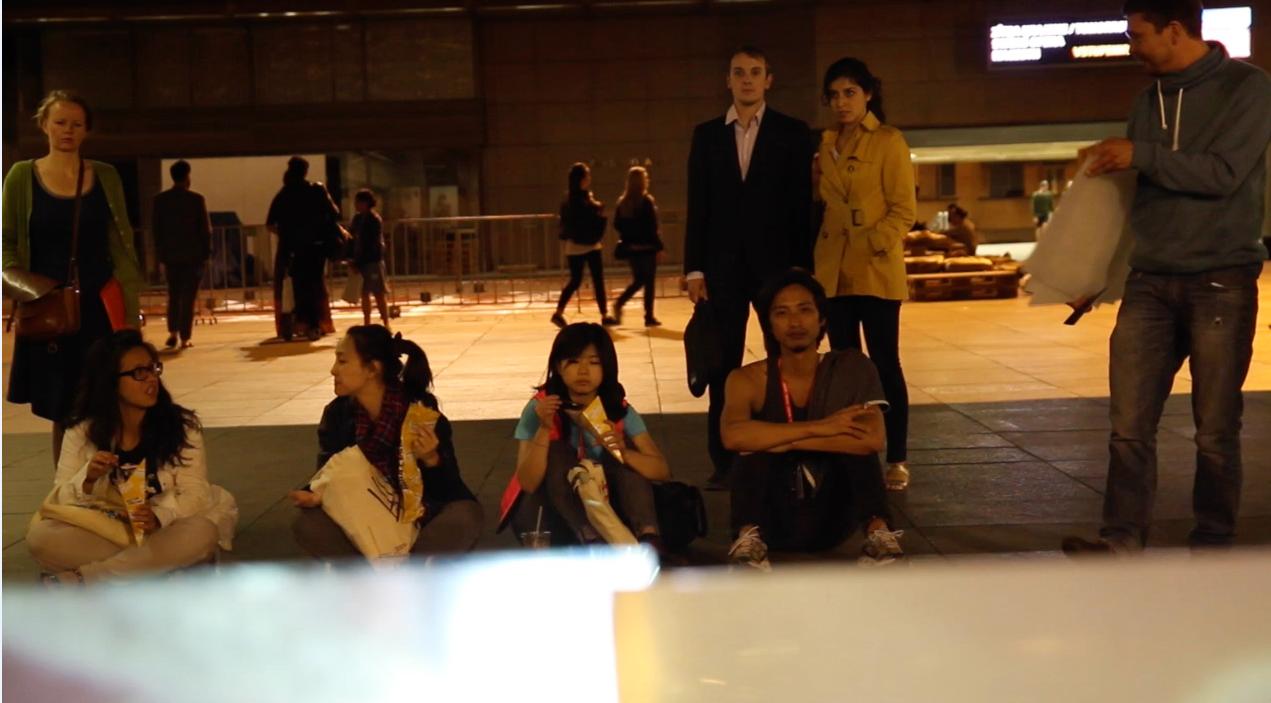 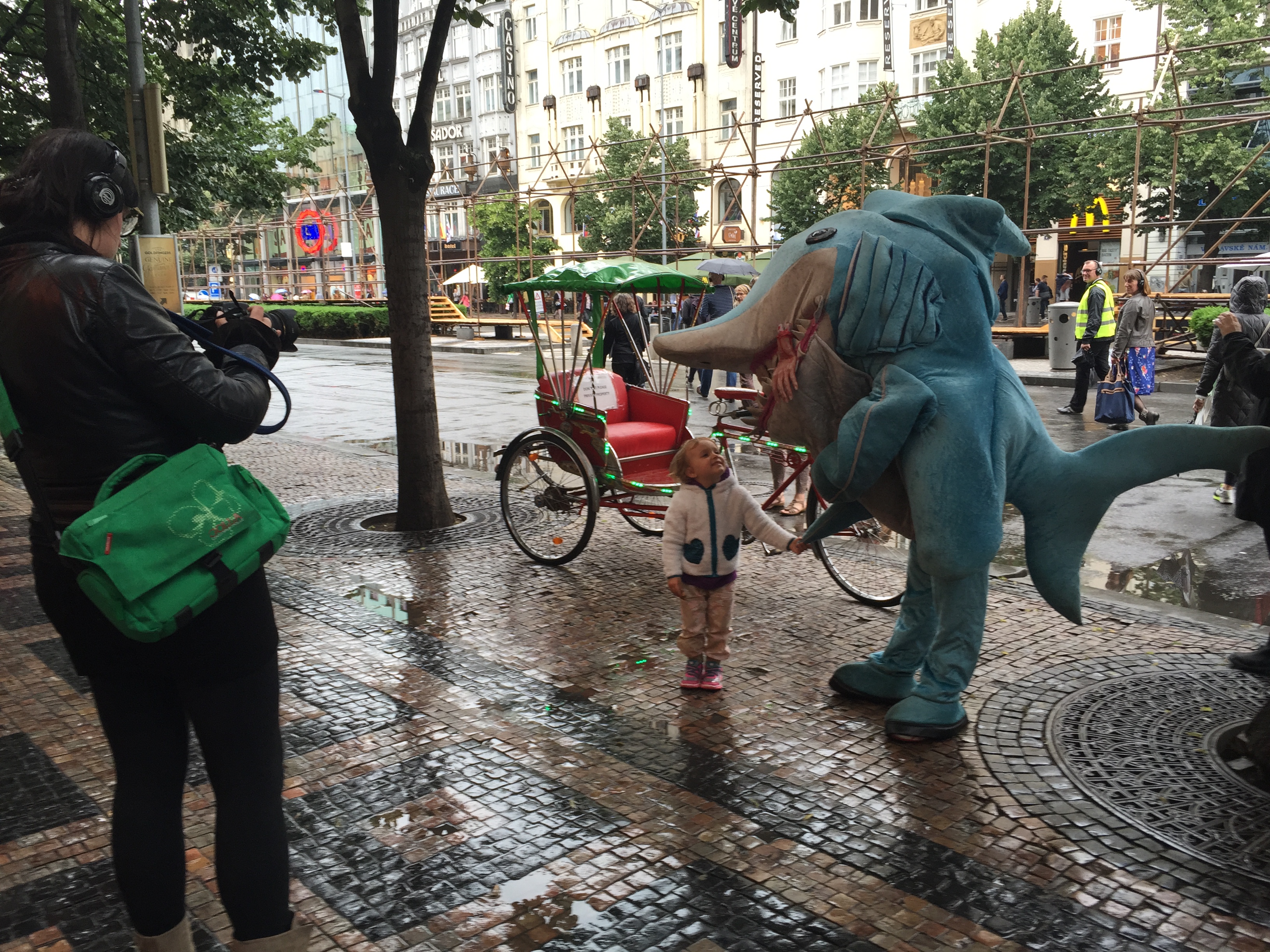 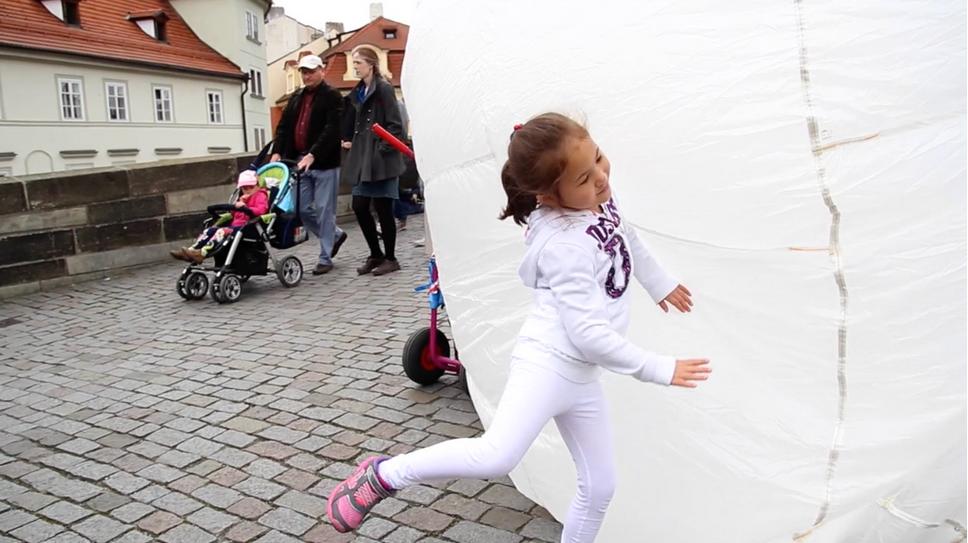 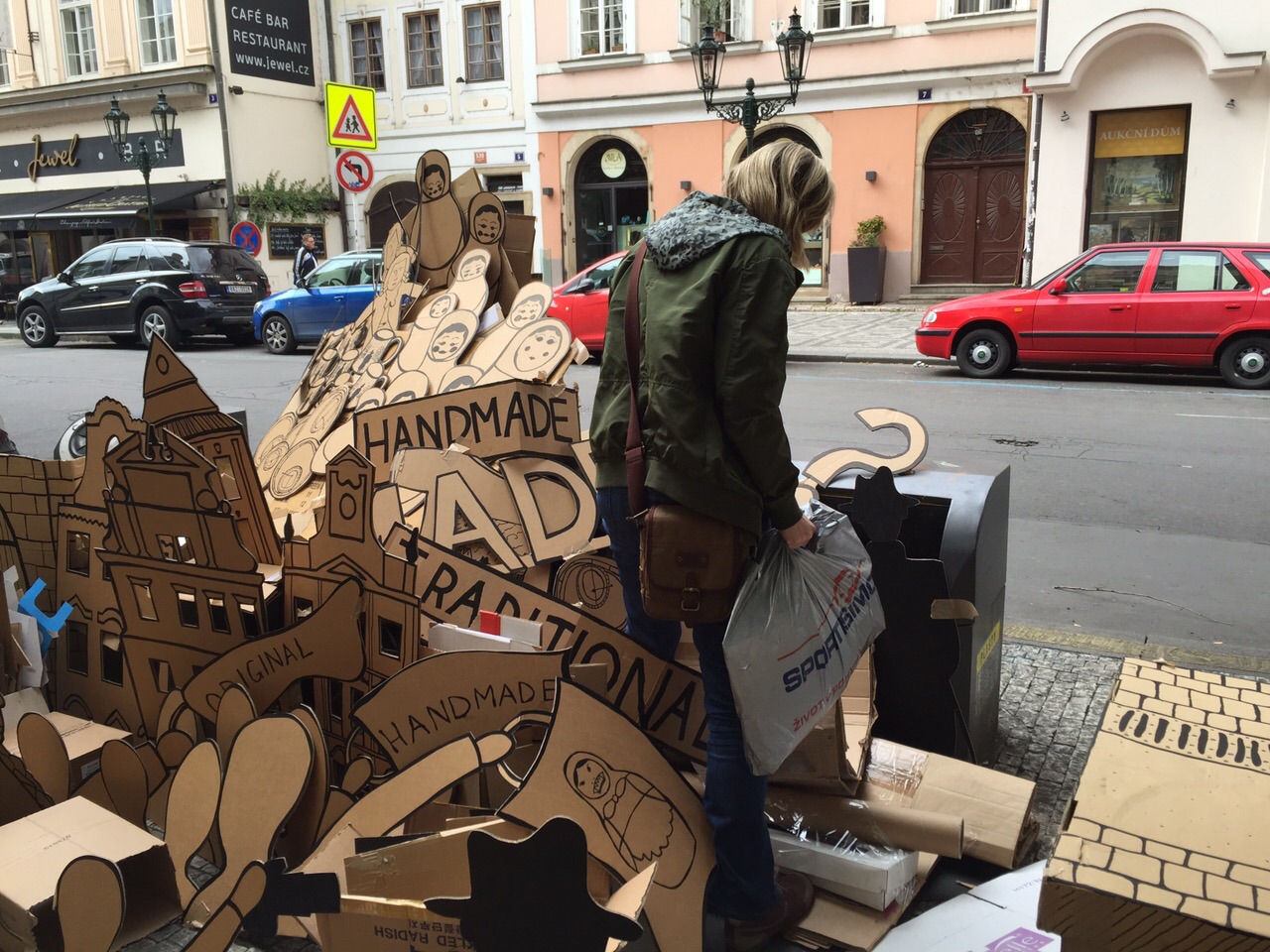 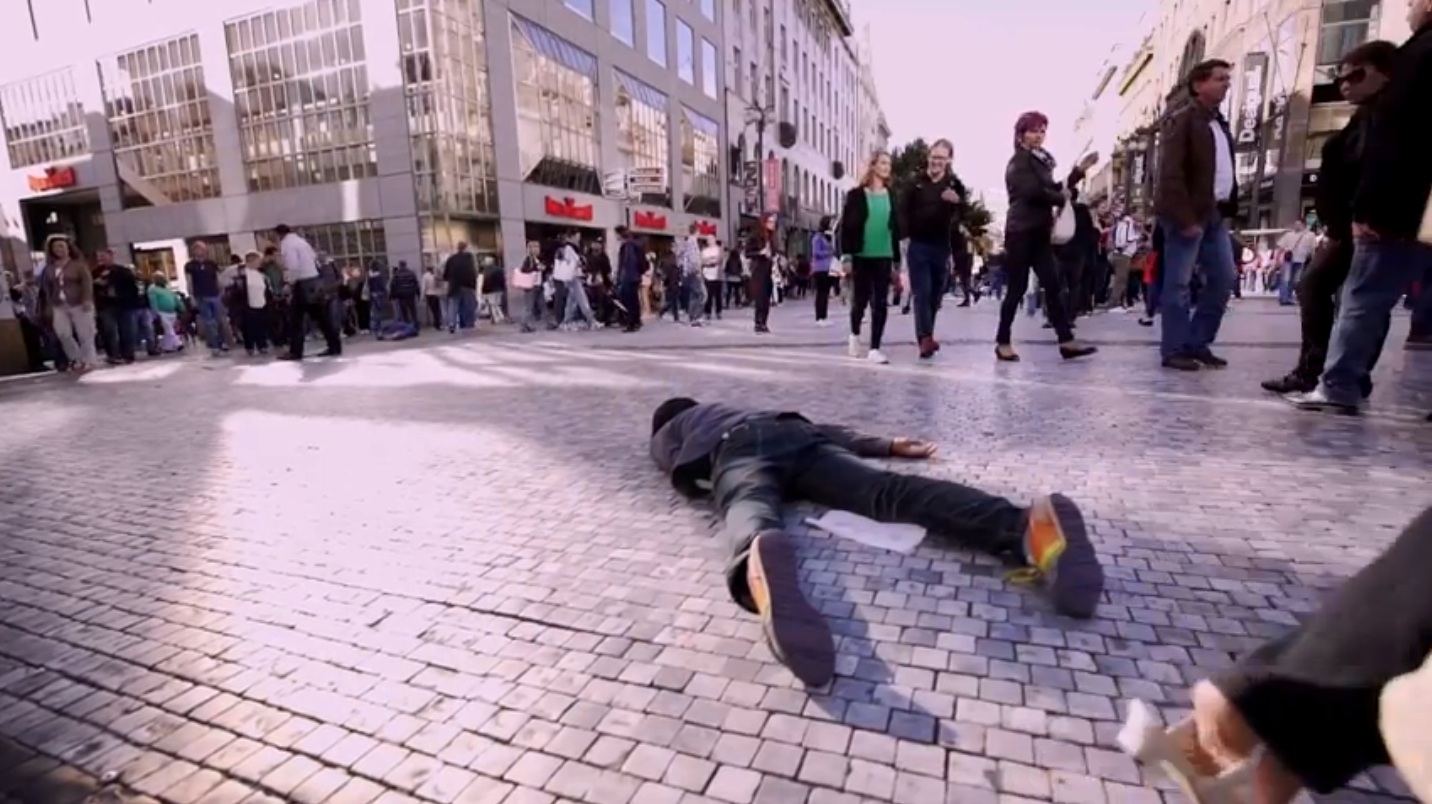 Julian Hetzel's project played with the codes in public space

And there we finally were: in the Lecture Hall of Colloredo-Mansfeld Palace. A place to give speeches. To address the public. To present ideas. Each day we travelled from the fairly unknown suburb of Hloubetin in Prague 14 to the city centre, to work in the streets. We brought our materials to our well-camouflaged Outpost Truck and printed our results in the Publishing Room, this strange hallway, this weird non-space where the toilets are located and that connects the grand rooms of the palace. Now that the work is finished, at least for now, it’s time to finally climb a traditional stage.

As with any expedition, when we started this research project and headed into the city of Prague, we didn’t know what we would find. We did start with a lot of questions though. Assumptions even. We suggested that scenographers and designers had the sensibility, insight and tools to critically question, map and intervene in the multiple complex realities of public space. We believed they were capable of exposing, disrupting, dismantling, twisting, tilting or revealing these realities. We wanted to know how exactly  scenography could shift our perspective of the realities we encountered. How could it reveal the fissures and cracks or create space for the in-between? What strategies, tools and ways of working did it have to offer? What way of looking could it add to the many perspectives that were already available in public space? What could it actually ‘do’? Many questions and now we have made a first and feeble attempt to start formulating some answers…

*Praguefication – Rick van der Linden invited us to look at Prague as a pleasure-park, coated in sugar, dominated by facades. He made us aware of the overwhelming presence of Prague representations, the presence of replicas and how in this multiplication of Prague’s appearance, the difference between real and imagined has become increasingly blurred.

*Backstages – We were shown or brought to many backstage locations. Maarten van Otterdijk created SELFIESPOTS throughout the city at locations that could provide unusual frames. Hieke Pars pointed the way to Opatov, a suburb on the outskirts of Prague, far far away from the city centre. Vinny Jones highlighted locations one would normally pass by and revealed stories behind the city’s lighting design. Carly Everaert created conditions for people to get lost in the city and end up in unknown territory

* Spectators – The reporters helped us to see that there are many audiences in public space simultaneously. They do not form a homogeneous group like you find in the theatre. They are often invisible and ephemeral. They step in and out of their role as spectator. They often don’t realize they are being watched by other audiences themselves. People looking at people looking at people and so one. A multiplication of spectatorship. By zooming in on spectators, we saw how people actively negotiate with the spectacle before their eyes. How they try to frame what they see. And how lost they are if they fail.

*Rules – Many rules and codes that apply to public space were revealed during the research.

– What one can and cannot do on the Charles Bridge or in a narrow street. You can inflate a big balloon but you will be asked to leave within 20 minutes. You are not allowed to obstruct a street, as Eva Schippers found out.

– Where one can and cannot advertise. Prague explicitly prohibits advertisements for shops or restaurants on the four central streets of city. But no one can forbid you to dress up in shark suit and jump up and down in front of a Thai massage parlour. And even though no one understands the connection between a shark and a massage parlour, no one in Prague can overlook the connection anymore. The shark man landed himself the starring role in Katja Heitmann’s movie.

– Where one can and cannot dispose of one’s garbage. Council workers take pictures of sites in the city where the bins are full and garbage has been left  illegally at the side of the street. They take pictures again as evidence after cleaning the location. What did they think when they stumbling upon Florian de Vissers’ wonderful cut-outs?

– Where one can and cannot lie down in public space without creating panic. Julian Hetzel’s project played with the codes that are activated in public space when people are confronted with disturbing images of a catastrophe.

What scenographic effects have we come across? What strategies, tools and methods were put to use in public space?

* Following – Following colors, following urban performers, following cardboard.  Carly Everard, Naomi Bueno de Mesquita and Florian de Visser invited us to do just that. Following not as in following a rigid pattern or following the rules, but quite the opposite. Following in the sense of not knowing where you are going. Following in order to see where you end up, what you’ll find out. Following as an act of surrendering. To allow for the accidental. Or daring to let go of preconceived ideas and assumptions. Or to willingly identify with  ‘the other’

*Doubling – Doubling places in order to reveal something in-between. Doubling people, locations and times using video projection and confronting people with what they think they know or recognize and then surprising them. A costumed shark that starts to talk and reveals the reality behind the costume.  A cut-out postcard image as used by Rick van der Linden which blends with physical space and complicates the boundary between the real and the imagined. Doubling as a way to make people second guess, inviting them to try to grasp what they see.

*Transporting – Bringing something here from somewhere else. Stories from the suburb brought to the city centre. Eva Schippers’ curious balloon that came from nowhere? another reality? suddenly inflated on the streets.

*Marking or Highlighting – Suggesting to your audience to go there, to stand  here, to look at this over here, to go there to listen to this. Marking these places on a map. A strategy used by Hieke Pars, Rick van der Linden, Maarten Otterdijk, Vinny Jones.

* Intervening – New objects added to the urban fabric. Fremdkörper. Ranging from slightly unsettling, as in the work of Florian de Visser to full-blown provocation, like Julian Hetzel’s project. From poetic to uncanny. Dead objects coming to life, engaging in conversation with people in the street. Living bodies becoming dead objects, scaring the hell out of people.

What did the different interventions, cartographic explorations and reports of Between Realities ultimately ‘bring about’?

We have noticed that it’s almost impossible to answer these questions without reverting to cliches. We wanted to say things like: they have used tools to intensify the spectator’s way of looking, to sharpen their senses, to shift their perspectives. They have zoomed in on forgotten details, they have spotlighted what was in the background, they have aestheticized the mundane, they have made the seemingly arbitrary meaningful, they have revealed public space as a living space, and so on, blah blah blah. [see also our post Talking and Walking our way back: Publishing Room]

We do believe that within the context of the PQ, among all the other exhibitions, Between Realities has made a valuable contribution by demonstrating that public space is an interesting stage for scenographers to explore and develop their tools, to sharpen their thinking and to test their assumptions. We can say that public space is a much more challenging, demanding and unreliable stage than the traditional theatre stage – with its multiplication of audiences, spaces, frames and realities, making it very hard to predict or observe what your work is doing to whom, or how it is being perceived. And we can say that public space as such, forces designers to explore untrodden paths, to move out of their comfort zone, to let go of expectations and to constantly adapt in a far more intense way than in the theatre. Working in public space spotlights the importance of research, exploration and experiment.

Moreover working in public space has allowed the artists to meet their audiences in all their heterogeneity. The lack of a clear one-dimensional theatrical frame triggered a vast array of contrasting responses to the work they were doing and created feedback in a much more straightforward way than one would ever find in the theatre.

Choosing public space as our playground has also proved to be an excellent way of having different disciplines meet. Public space has functioned as a place that can connect different ‘buildings’ and ‘institutions’, an environment where  differences and resemblances can and have been mapped.

So was it all a big success then? No of course not! As we said public space has also been a challenging space, in particular the madness of Prague 1.  A lot of what we did remained unseen, unnoticed or misunderstood. It proved hard to find an audience and we have been competing with many other kinds of events staged in public space that apply the exact same tools as we use, probably with more successful and sophisticated results. The city was full of  highlighted locations that were special or extraordinary; there were Fremdkörper on every street corner that no one seemed to perceive as being strange and there were stories everywhere emanating from different times and other places.  Often we couldn’t tell the difference anymore between them and us and we seriously doubt if everybody managed to get their intentions across.

Finally we failed to provide the artists, their audiences and ourselves with the most important commodity that one needs if one really wants to connect to a place and the people there, and that’s time. Time was too short to really think, really experiment, really develop, really understand and really investigate. Time is a true necessity for so many designs and performances, but particularly when working in public space, time is essential in order to become part of, to relate to and to make sense of the space around you. Therefore…… to be continued.