TALKING AND WALKING OUR WAY BACK: THE PUBLISHING ROOM 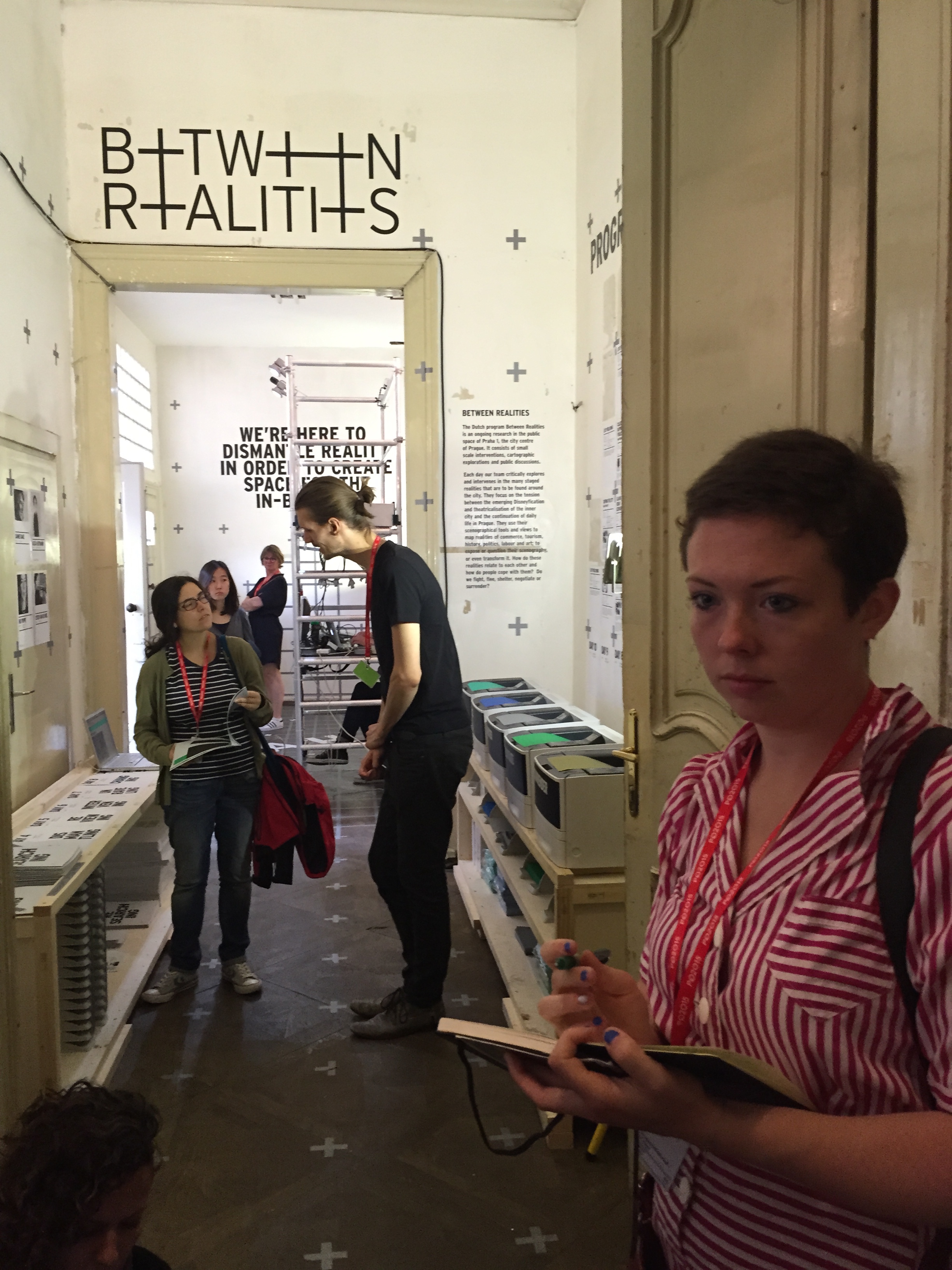 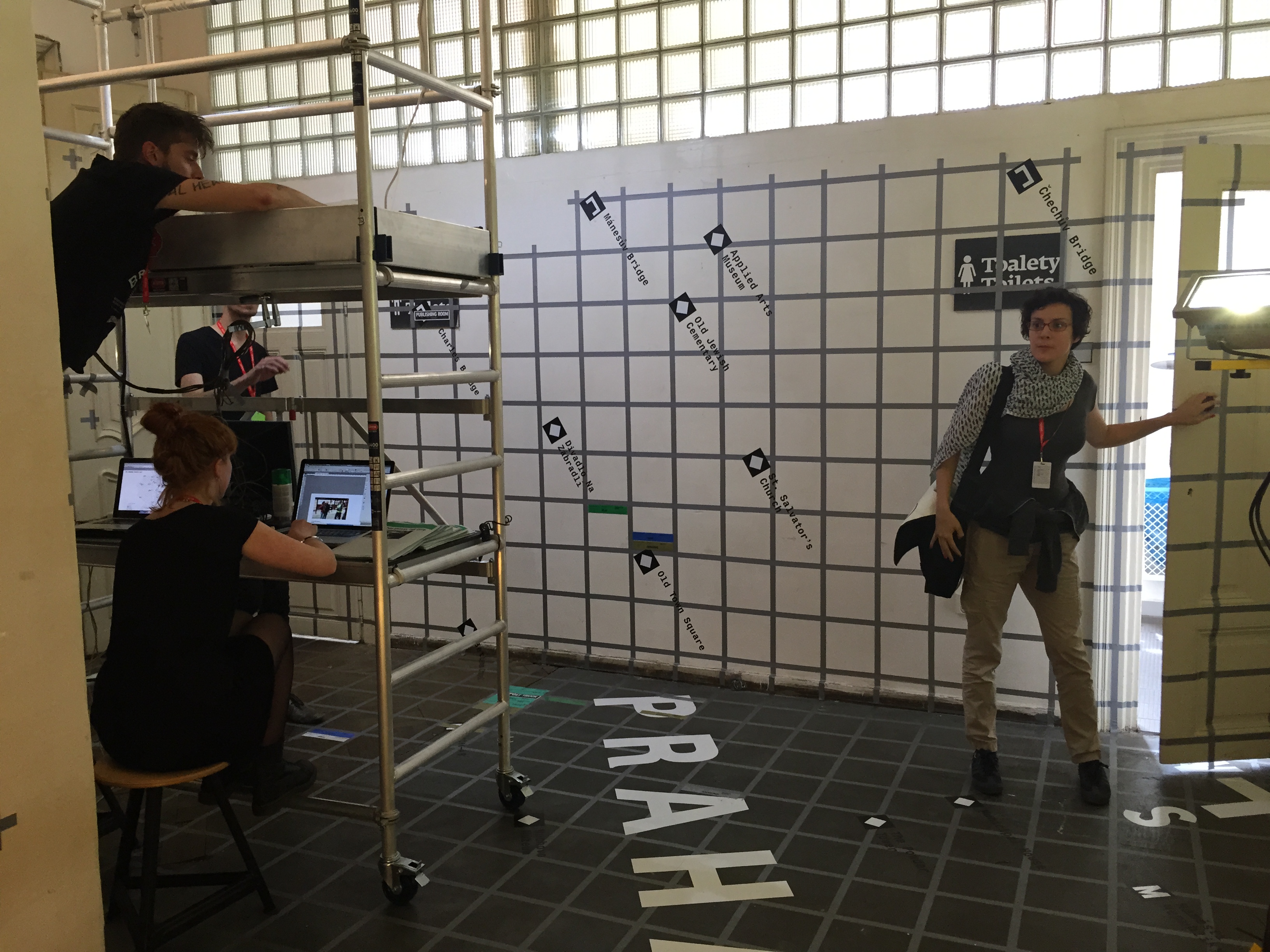 An empty expo in the beginning Our host explaining our machine 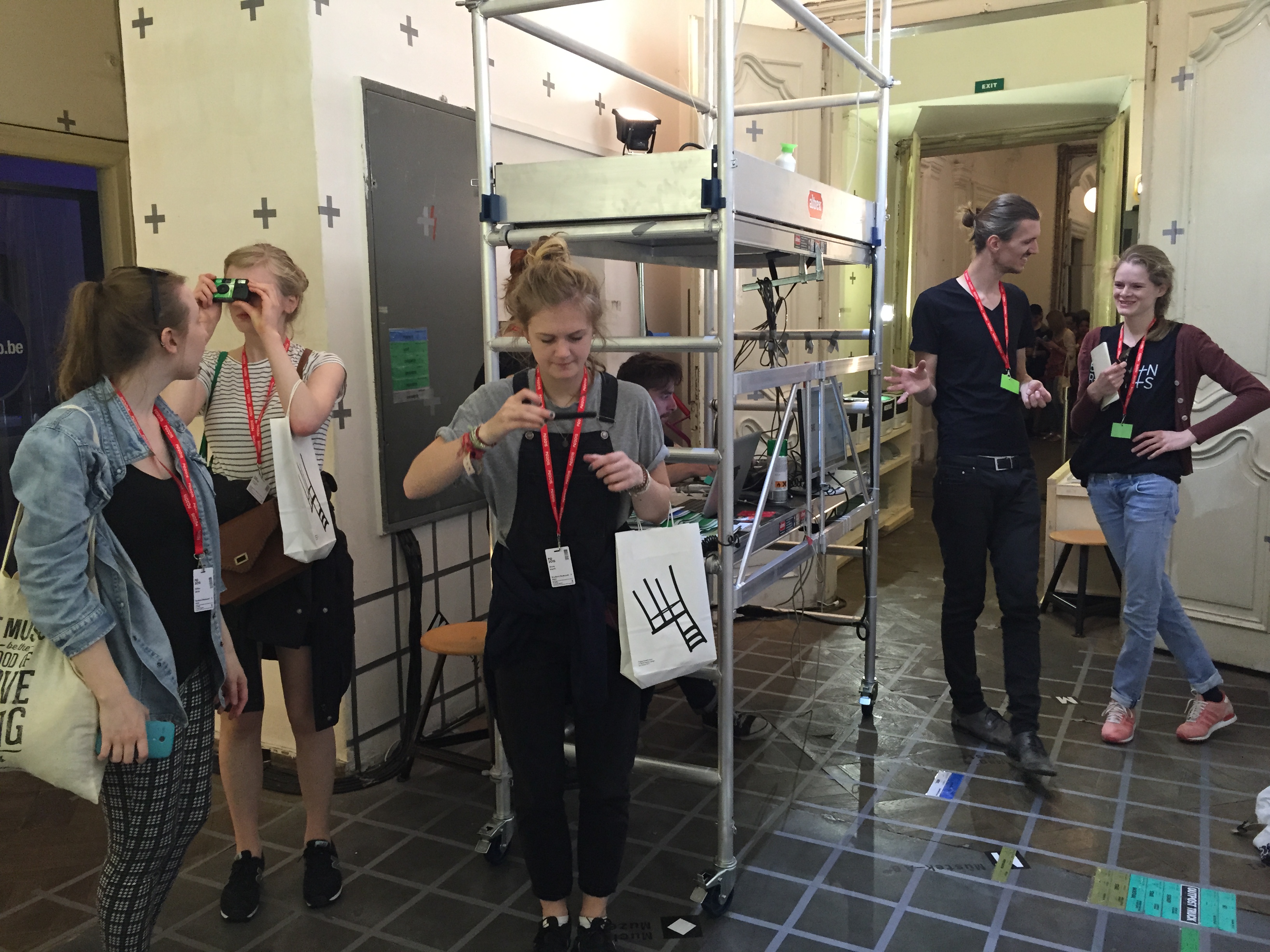 Visitors in the publishing room 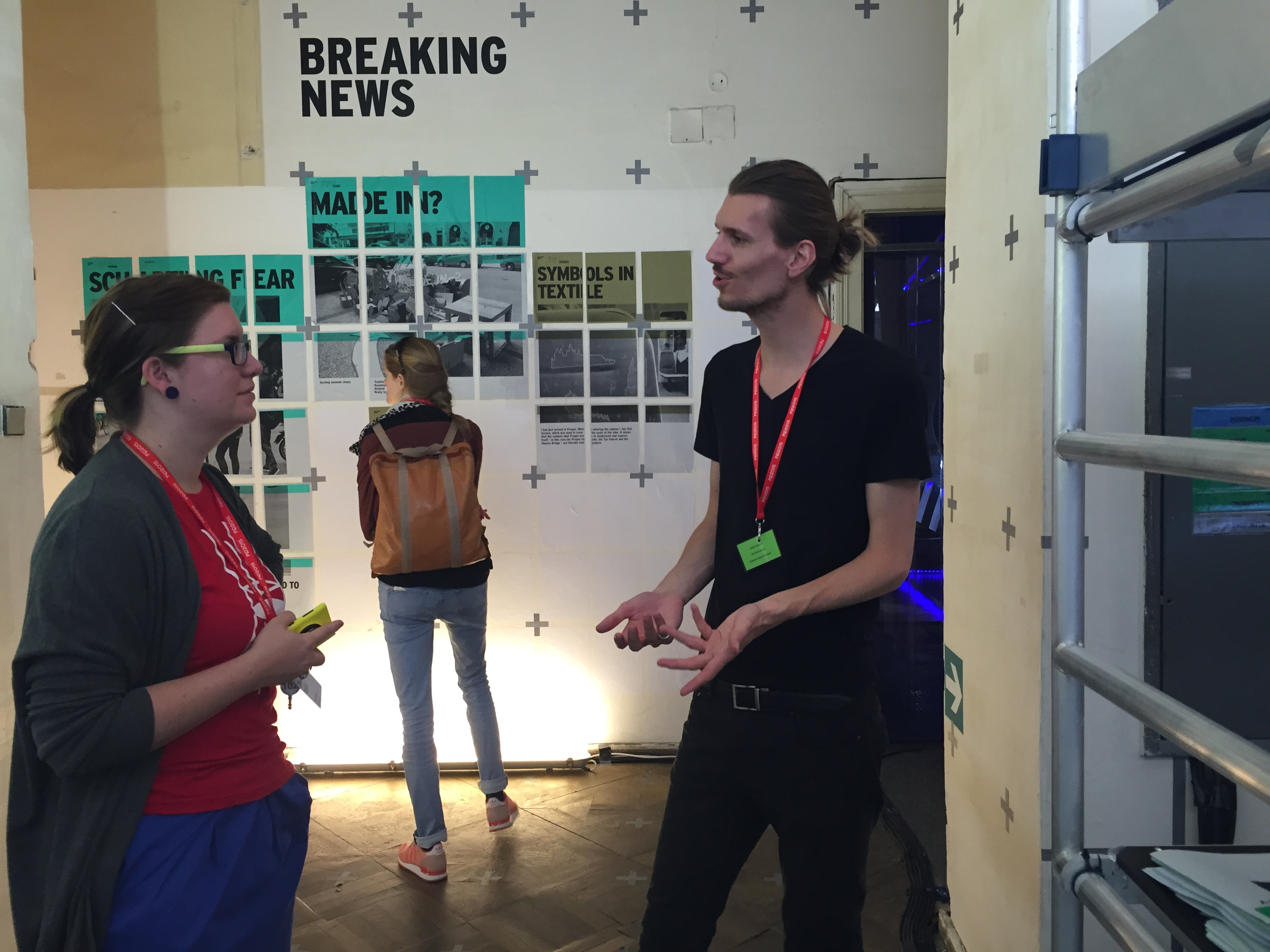 Our host discussing our machine 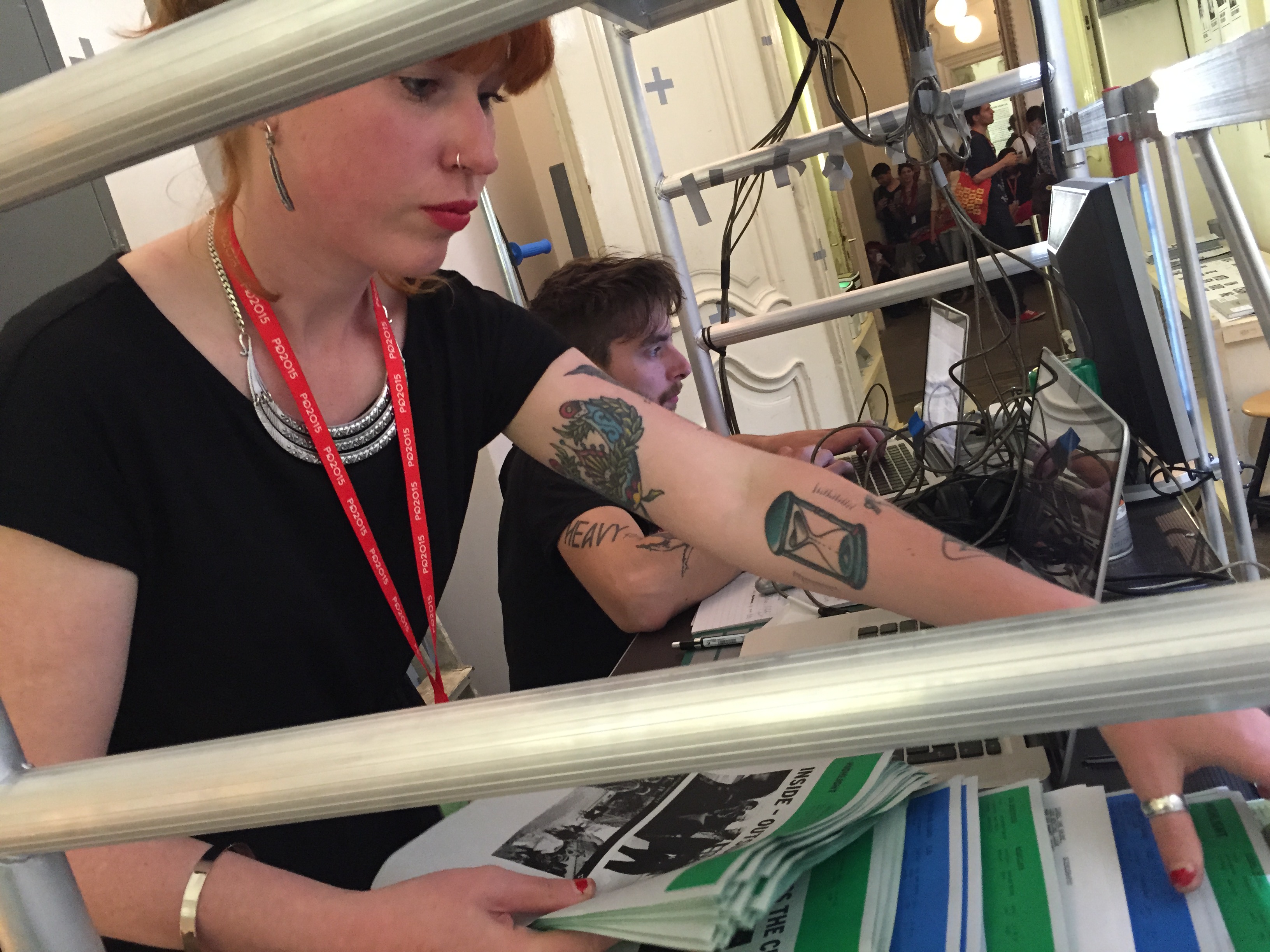 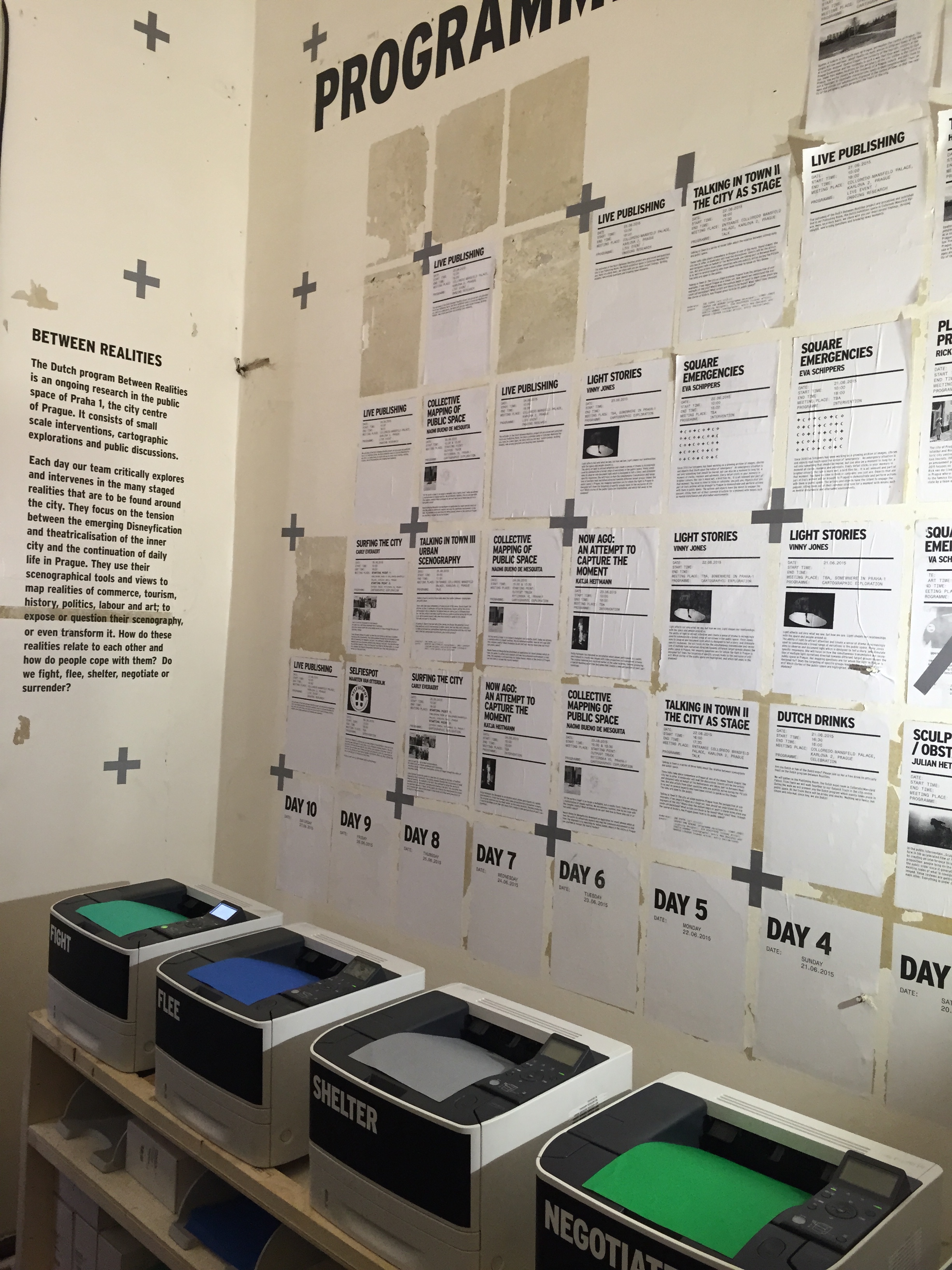 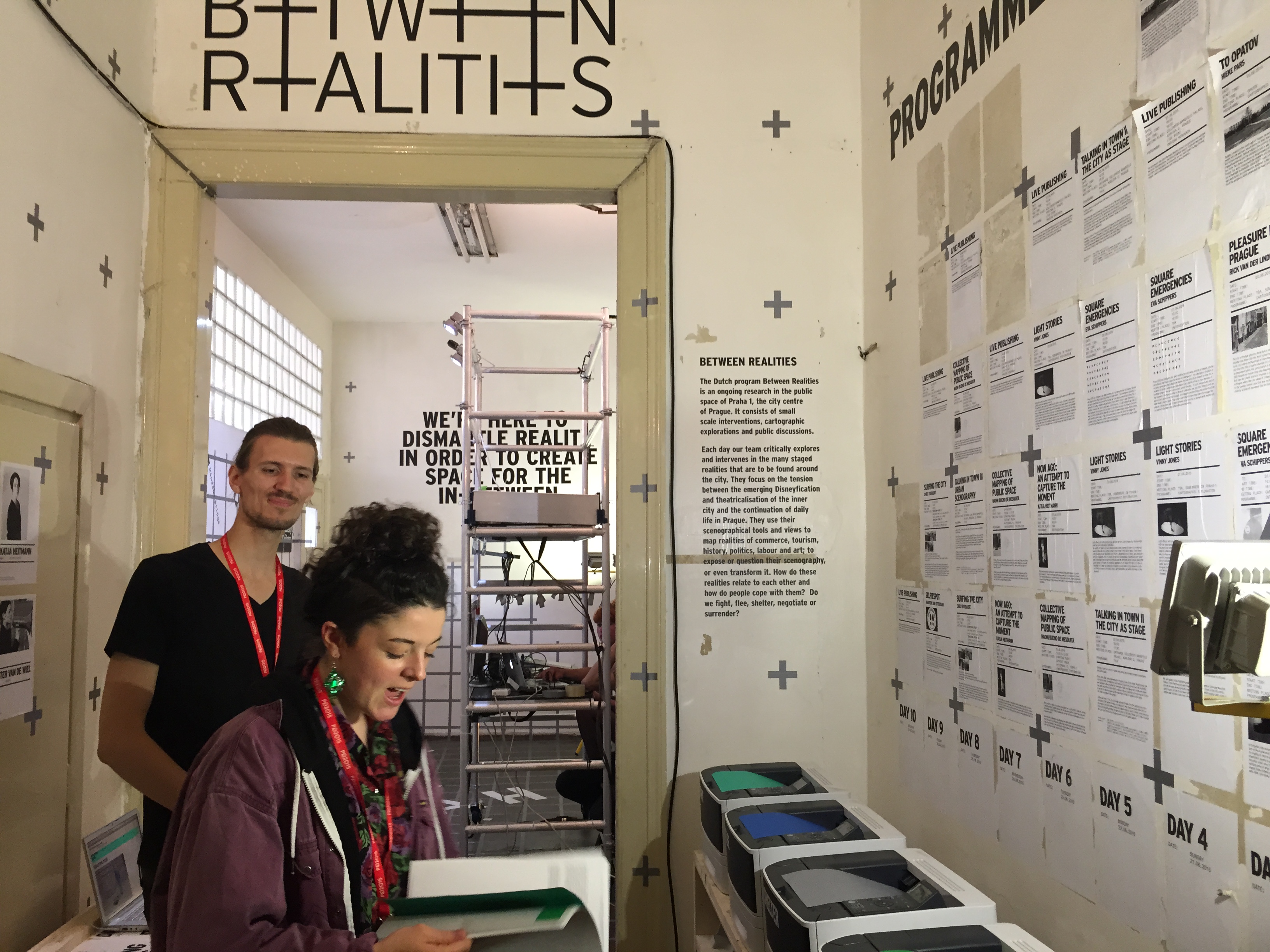 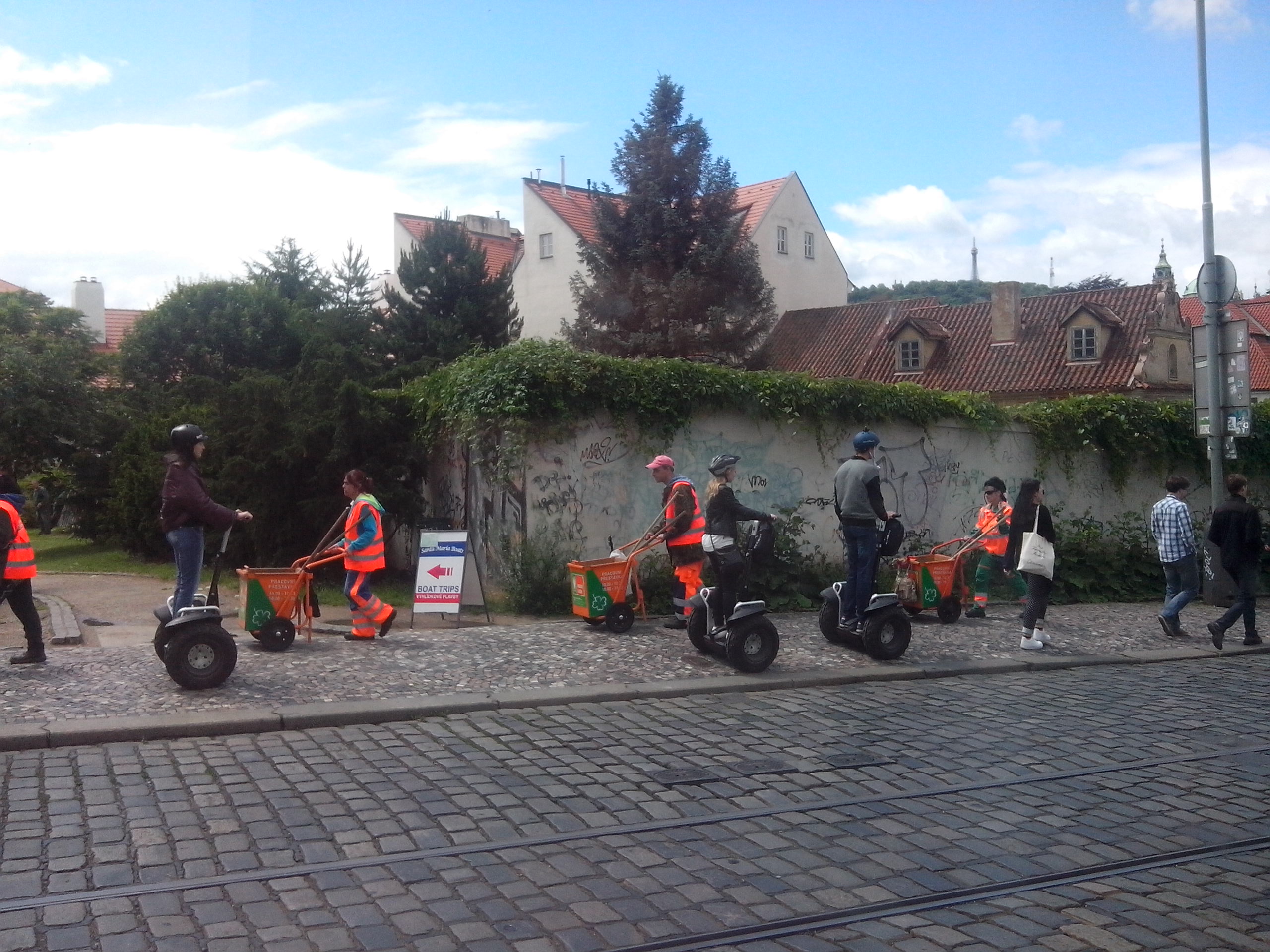 Puck Wagenaar is sending us pictures of her changed perspective on urban space after visiting Between Realities.

In the early stages of this project, co-dreaming about the design of the ‘exhibition’ Between Realities, there was a small, simple drawing of a little, cute and manageable machine standing in the middle of a space, producing an analogue, a digital as well as a spatial publication all at once. It represented the essence of our exhibition design, the tool we needed to conduct our research. The place where everything – mappings, interventions, reactions – would come together in order to enable us to see new connections, draw conclusions and to stay in discussion with each other. A place that would start as an empty grid, to be filled with research results over a period of 11 Between Realities days.

Over time, this machine has grown, the whole space has become one big machine. By entering the Between Realities expo, the PQ audience literally stepped on the map of the inner city of Prague – Prague One – and was able to see our research collection grow over time. Somehow you immediately felt this machines’ tentacles were stretching out of the expo space; out of the building to different parts of the city. To interventionists, cartographers, reporters and curators working at different, public places in town. It was very clear that at that very moment you could decide to leave the PQ to go out there to meet, see or talk to them. Encouraged by our host – a friendly, interested and charming guy who explained and discussed the project – and with the help of a wall posted with information for visitors about the whole program, people really did go out. And by doing so, by going out into the city, you could  become part of the research yourself.

As Anne Karin ten Bosch succintly put it at a private get-together within this ‘machine’; at first we – the curators – had set the rules for uploading, processing, editing and publishing content, but along the way the ‘machine’ had taken over and was controlling all the Between Realities participants, including ourselves. It was as if we had created a monster; a giant racehorse out of control. With on its back two mad graphic designers riding it tirelessly, seemingly relaxed but totally focused on printing Day Publications, posting Breaking News on the wall, highlighting Highlights, mapping out places on the Floor-wall-map and updating the Program continuously. In that regard their graphic design was exceptionally scenographic. They weren’t transforming existing content into an aesthetic lay-out like graphic designers normally do, but they had designed an open structure in which content-to-be, made by many different participants, could be categorized and filtered in order to become an analogue, digital and spatial publication simultaneously. Hybrid publishing in optima forma, opening up a pile of research for every one of us, yourself included. But also an ever changing performance, made possible by scenographic structures and tools.

And of course this monster not only produced what we so desired – elegant conclusions about a beautifully phrased research project on the scenographic perspective on urban space – it also started to sweat, poop, burp, pee, lose hair, puke and move in unwanted directions. At other times, sudden mood-swings made her blow beautiful bubbles about scenographic views, tools or insights. Was it that we became so hooked by these bubbles? Simply longing for the next one to come? New Breaking News to paper on the wall, new Phenomena to help categorize our research?

It was a daring and vulnerable endeavor. We completely opened up our research process, the ugliness, messiness and incompleteness of it. Not the research of one doctor in a clean lab, but the research of a set of diverse makers and thinkers in a filthy, disneyfied, enticing, surprising, complex and overwhelming city. For some visitors this research must have been hard to grasp, others undoubtedly immediately sensed what the project was about. We received  stories of people who after visiting the city went back and looked at it in a completely new way. Like Puck Wagenaar who sent us back pictures of her changed perspective on urban space after visiting Between Realities. And slowly, after days within the mess, we started to see connections, words came out, language started to emerge.

Along the way we noticed:

– Breaking News only featured Fight and Surrender categories. Obviously to flee, shelter or negotiate aren’t spectacular enough to be framed as Breaking News. At the same time there was nothing revolutionary or world shocking about our Breaking News. We might say that our Breaking News told of minor spectacles, small events, meaningful within their own little context, but news nonetheless.

– Most Research Results ended up in the categories Negotiate (most) and Surrender (second). Clearly, the people we brought along but also the audience passing by preferred to negotiate with or surrender to reality. More extreme acts of fighting, sheltering or fleeing were less popular. In this culture we’re all so ‘nice’ to each other or simply accept and undergo reality, no matter how strange or alienating. That is, as long as we can tell art and real life apart. How people respond when these distinctions become blurred or disappear all together, we saw in Julian Hetzel’s intervention Sculpting Fear – Obstacle

– Our Highlights were also mostly within the catagories of Negotiate or Surrender and none within Flee. That doesn’t mean to flee is of less importance – maybe even the opposite; take a look at ‘Locals drawing maps of hiding’ by Naomi Buena de Mesquita or Rick van der Lindens ‘Reversing Golden Lane’ or Hieke Pars’ ‘To Opatov’. Here a longing for exodus becomes manifest.

– Phenomena most used were Change of Scene (21), Encounters (28) and Spectatorship (19) and Performers (11). It seems that the interventions and cartographic explorations mostly pointed to moments or incidents where the encounter with and interaction between a performer and a spectator triggered a transformation, a change of view, a change of perspective, a change in space. Could we say that the performative and transformative potential of public space came to the fore?

– Some spots on the map clearly stood out in terms of the amount of results connected with that particular location. Take the Charles’ Bridge or Wenceslas Square. We expect there is a whole range of reasons that might offer a logical explanation for this, most of them probably very arbitrary or pragmatic and not that interesting. Some explanations however are much more imaginative and telling. It seems the Charles’ Bridge is like a kind of irresistible magnet or a Siren that lures people into its arms. Once you are on it, you can’t escape anymore. Those who have participated in Carly Everaert’s project Surfing the City and who decided to start their surf on the bridge know all about this, following red jackets into eternity.

But what does this all tell us in the end? It might seem as if with this way of structuring our research, we have grasped the heterogeneity of reality while in fact it only made us even more confident that the aspects found are just a small part of all there is to grasp. We didn’t look for and find the workings of scenography by capturing it all. On the  contrary, effects were found by zooming in on small details. This way it gave us an idea about the whole. Exploring and diving into masses of people, objects and situations along the way, allowed us to find our pars pro toto’s, which opened up multilayered worlds for us. For example, focussing on Sharkman gave us a a sense of overlapping realities of commerce, performance, personal stories, costume, migration, poetry and advertisement rules within one single figure. Zooming in gave us a change to explore public space from the perspective of scenography.

Read more about this perspective in the article: TALKING AND WALKING OUR WAY BACK: THE LECTURE HALL