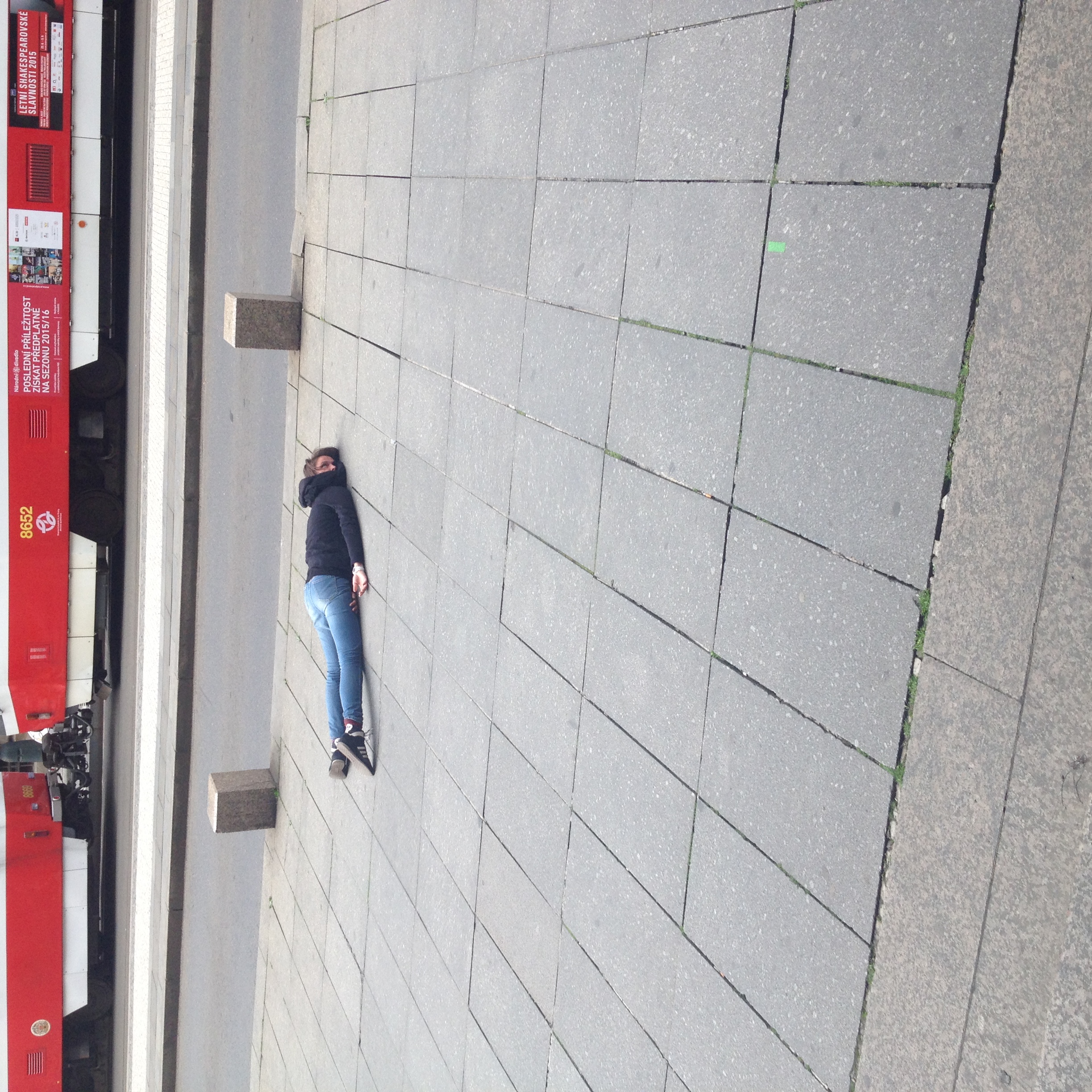 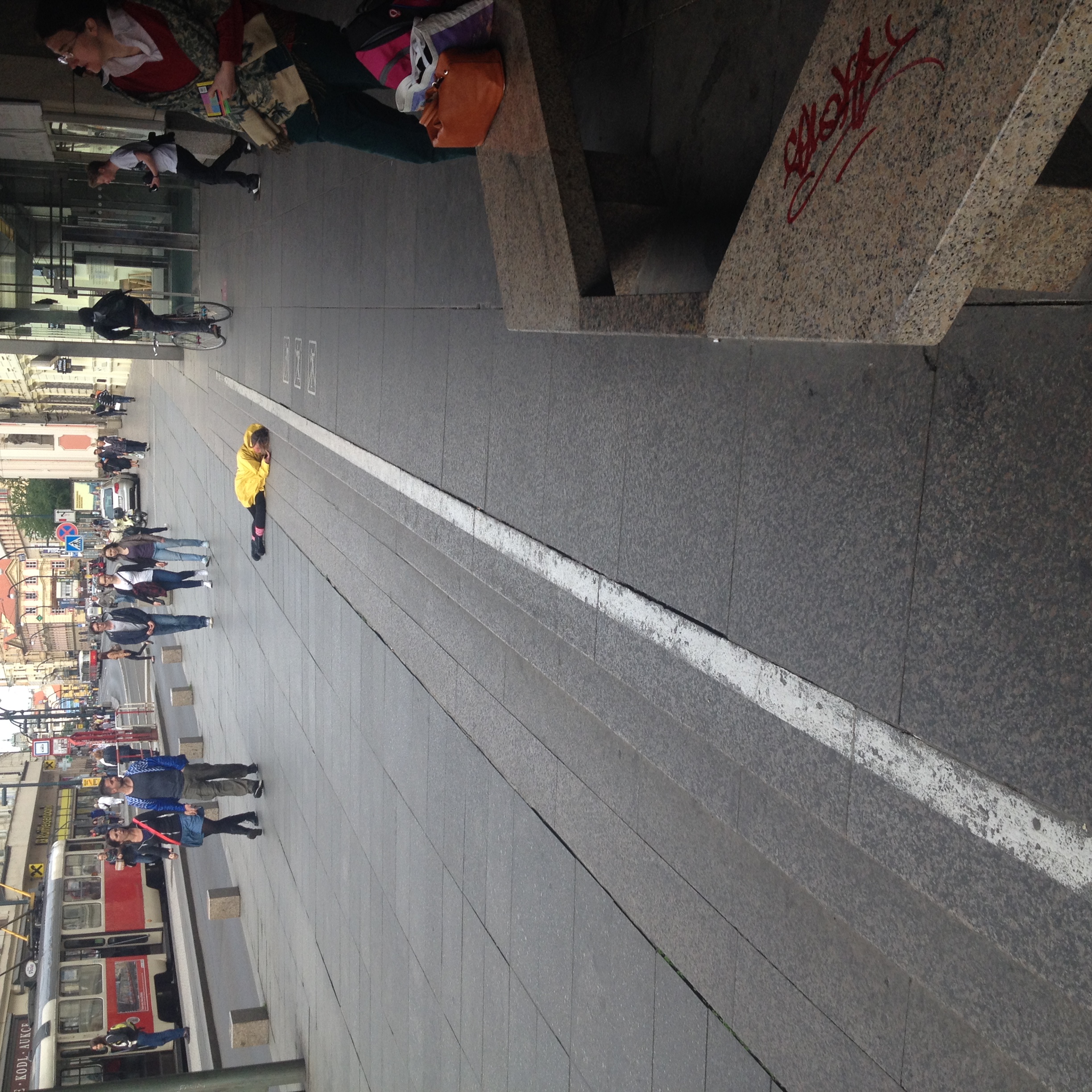 IF YOU LIE DOWN YOU CAN’T FALL ANYMORE

Julian Hetzel’s Sculpting Fear – programmed as one of the ‘tribes’ in PQ – is quite simple in it’s form:
Five people lie down on the pavement in different positions that makes it look as if they were ‘dropped’ there. They always lie within sight of each other: in order to emphasize the constructed layout or installation. The performers have their eyes open, and answer when you speak to them. Moreover, they surrender to the pavement and to what happens to them. Two ‘guards’ are close by to make sure that no one attacks them or anything unfortune happens.

These are the basics of Sculpting Fear. The effect/affect it has, the impact on it’s surroundings is very complex and multi-layered.
I will here try to map the range of reactions and the different affect levels/modes in the three locations where SP was performed; in front of the National Theatre, further down Narodni street, and at the busy intersection of Narodni and Namustku.

I. FIGHT / NEGOTIATE
National Theatre, square (day 1, Friday June 19)
Type of audience: Mixed. Theatre, festival people, older and younger people hanging around in the square, at the side of the street, passersby, a tram stop, busy location with cars, taxi’s, buses, metro, the river. A place where people dwell longer, or change direction, a meeting point.  A place to be alert, watchful of one’s surroundings.

*
People lie ‘dead’.
Silent and motionless on the pavement.
As if they fell down or collapsed.
Being confronted with this image
for the first time affects me deeply  although I
know they are performers.
It touches you in an almost indescribable way.
I realize that we are not used to
seeing people lying on the ground.
To see bodies collapsed on the pavement
where we walk.
It’s just someone lying
down, but it looks extremely scary.
As if they are not only vulnerable,
but also form a threat to us, as if they are an omen
that something terrible is about to happen.

*
At first, people are shocked,
they run up to the first body they see,
ask if everything’s alright. Talk to the performer for a bit.
Realise they are OK.
Still find it hard to walk on.
One girl rubs the back of one of the performers
before she walks on.

When they realise it’s a performance,
people who in first instance came to help, become angry.
Their anger comes from
shock, and the comprehension of having been ‘fooled’.
Some spectators find this aspect of the
performance problematic,
they feel the act of lying down is ‘too easy’
and aimed too much at causing a shock effect.

On the square, where one performer lies
under the PQ flags, and in front of the theatre,
(this location is highly contextualised)
Two old women are not taken
aback. One exclaims: “With my experience as
a nurse I know what an actual collapse looks like and this is
a fake!” She then prods the male performer’s bottom…

A lot of people walking by are ignorant to what is going on
(see Tessel’s ignorant girl).

People call the police
without checking on what is going on.
A policeman becomes really angry and
threatens Eva, one of the performers,
that if she doesn’t get up
he will use force.

The waiter of a nearby cafe that called
the police gets very upset too.

*
When you focus on one body
you are not aware of the fact that more
people are lying down. You zoom in.
If you walk from one body to the next
you can always see 2 or 3.
And once you know and realize that these
people are not hurt, but part of an
installation, you can perceive them in
a different way.
It becomes possible to see them as
sculptures. Moulded into these positions.
Carefully shaped.
Details become apparent. The angle of a
leg, the twist of an arm, a hand palm facing
towards the sky, the way a neck
curves, how hair is draped over the
sidewalk. The open eyes, without expression,
calm.
Living sculptures, of which you’re not sure
what they represent; they evoke feelings of
violence, fear, panic, anger, empathy, or refer to
aggression, war, death, loss of control, attack,
care, ignorance, brotherhood, sleep, exhaustion,
the unknown, disruption, short-circuit in the mind, etc.
Yet it is never one of these things alone. It changes.
Depending on who is watching, or how long you watch.
As if the passerby, the audience, the witnesses,
together continue to sculpt the bodies
and what they mean as they
carry on watching and relating to them.

When I look into the calm eyes of some of the
performers
it opens up another perception.
As if they are being sucked down to the ground  –
paralyzed by life, and it’s hectic
flow. As if lying down forms some kind
of answer, a last resort, a strategy to cope..
On the ground is where they want to be it seems –
and they feel safe, or safer, now they are
flat on the pavement, now they can feel the
earth.

If you lie down, you can’t fall anymore.

II FLEE
Narodni. In line on the pavement close to one another. Visible as you walk towards them.
Type of audience: Prague residents. Less tourists. Walking to get to a certain destination. Home, a metro, a shop.

*
Lying in row this time.
Quite close behind each other,
almost impossible not to see there are several of them .
Here a completely different scene. People do not hurry
to help. They just walk by.
Ignoring the bodies.
As if they are an everyday element of the surroundings.
Just another ‘thing’ lingering on the ground.
From the window of a building ashes and some fluid are thrown on Eva’s back.
She remains lying down.
No one seems to notice this.
—

III SURRENDER / SHELTER
Namustku
Busy intersection. Lying a bit further apart although still quite close together but because of the crowd
the bodies can’t easily be perceived as a group.
Type of audience: Pleasure seekers. Used to staged events and flash mobs. Familiar with ‘tribes’ in the sense of bachelor parties and other groups that dress alike. Consumers, party people.
*
This is the busiest place in town.
Here again the impact is very different.
Because it’s so crowded.
Not all bodies can be seen at once
One man wants to help
Then gets very angry (see video).
People here seem used to seeing staged events for fun and pleasure,
– they call it ‘flash mob’ and ‘stupid ‘art’,
– ‘strategies’ to make this a harmless happening.

*
By doing so they don’t relate so much to what the bodies represent.
The bodies are too nearby, the street too small and too crowded
to be able to start perceiving them on another level. As sculptures,
as metaphor, as image.

*
In this crowd the bodies become so vulnerable.
My friend and me watch and hold our breath, worried about what could happen.
A lot can happen to a body lying on the ground in the midst of a crowd. We feel scared for the performers, sensing how it must be to lie on the ground. Having all those people walk by. Insulting you. Kicking your feet. Touching you.
Using you as an attraction: lying down beside you for a picture – a macabre kind of mascot.
A trophy to pose with, a wild animal you shot, an enemy you killed ..
‘Nice to portray, for the folks back home..’

*
First overview levels of affect:
Affected because you think someone is injured
Affected because you feel ‘fooled’ by the performance
Affected by an image you rarely see
Affected by that fact that these people are doing something you are not ‘supposed to do’ in a public space
Affected by seeing them as relating to something; as a set of sculptures connected to fear, loss of control,  vulnerability, etc
Affected by the insight that they could be face down on the pavement as a last resort – as an omen for something that is about to happen.
Affected by lack of empathy shown by passersby.
By the high level of ignorance.
‘I’m sure someone has the situation under control so it will be fine’
[In the Kafka house, someone got stuck in the toilet and banged on the door, but everyone thought it was probably a performance except for one guy who realized what was going on and rescued him.]
Affected in the sense of being scared of what might happen
– because you imagine yourself prostrate on the pavement feeling how lost you are in the middle of a milling crowd ..
etc
etc