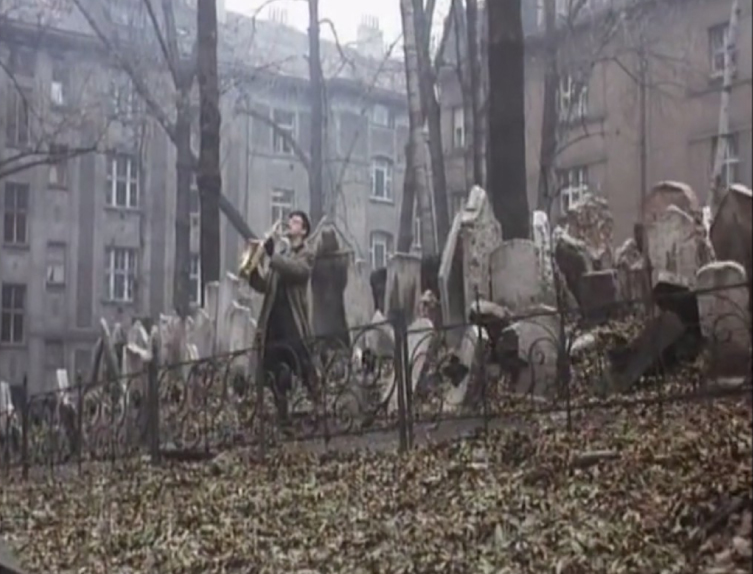 One year before the Velvet Revolution, millions of MTV viewers followed lead INXS singer Michael Hutchence through the streets of Prague, in the music video Never Tear Us Apart. This scenic tour of the ‘old town’ immortalised the capital and set the stage for a pilgrimage of western tourists yearning to glimpse the last vestiges of a city frozen in time.

This is just one of Prague’s many incarnations as decor. Each ‘stage’ in Prague’s history has been either the backdrop for, or the result of, the socio-political situation at that time. Sometimes the difference between who created the stage, who is using it – and who the audience is – is not always clear.

This article is a mise-en-scène of Prague from a cultural and historical perspective.

A saxophone player straddles a grave on the oldest, and one of the most sacred burial grounds in Europe, the Old Jewish Cemetery. Just one year later his actions would be considered unthinkable – akin to hanging out the window of the Anne Frank house playing an instrument – but it’s only ’88, and tourism has yet to sanctify the site.

When the same cemetery ran out of space, and purchasing extra land was no longer possible, additional layers of soil were placed on top of the existing graves. (According to ‘halakhah’ Jews are forbidden to destroy Jewish graves, and are not allowed to remove the tombstone.) In total, the cemetery is comprised of twelve vertical layers. 12,000 tombstones remain visible, although there are thought to be approximately 100,000 graves underneath. Antisemites allege that the cemetery was the secret meeting place of the Elders of Zion – and claim the The New World Order was created there.

The survival of the Jewish cemetery is due in part to a perverse Nazi plan to preserve the site (and the three surrounding synagogues) as a future museum for ‘the exterminated people’. Additional religious artifacts were stolen to be added to the collection to be out on display there.

From Gothic to Baroque

‘The stone bridge’ (what we now know as the Charles bridge) was renamed in 1870 after the king of Bohemia, Karl IV. Spanning the Vltava river the bridge connects the castle to the old town, and adjacent territories. The completion of the bridge transformed Prague into a multi-cultural epicenter by connecting neighboring settlements. This burgeoning metropolis emerged as the international capital of the Holy Roman Empire.

The Gothic style was introduced during the rule of the Czech kings. The Charles Bridge is the most famous architectural symbol of Prague, and the primary artery facilitating the movement of tourists to different parts of the city. Positioned on top of the gothic bridge is a series of 30 mostly baroque statues of saints, lining the balustrade. Beginning in ’65 all of the statues were replaced by replicas.

The bridge literally underwent a face-lift in 2014, when silicone was used to repair the mortar. Originally, egg whites (a more sustainable composition) had been used to strengthen the structure.

Under the reign of the Habsburg emperor Rudolph II (1583-1612), Prague reclaimed it’s status as the capital of the Holy Roman Empire – and became Europe’s stage for the flourishing arts and sciences. Described as the ‘greatest art patron in the world’, the liberal Rudolph emptied the treasury by furnishing the city.

In an effort to avoid bankruptcy, he offered a reward to any alchemist who succeeded in turning lead into gold. The hobbit-like Golden Lane is the street where he installed the alchemists of greatest promise, to carry out this experiment. Golden Lane is still one of the most popular tourist attractions in Prague – the entrance fee is 10 euro per person.

Rudolph was eventually ousted by the House of Habsburg because of his wild spending, and tolerant stance toward freedom of religion. The flamboyant emperor is replaced in 1612 by his nephew, who returns the seat of power to the more conservative Vienna. From there, he re-installs Catholicism as the only ordained religion.

Representative of this new policy, the city’s existing gothic facade was coated in a new baroque ‘layer’. This colourful exterior exemplifies the decor of the Counter Reformation. Despite Prague’s new radiant appearance, this period in time in referred to as the ‘dark ages’, when more than 100,000 Czechs fled the city under strict Austrian Catholic rule.

In a nod to history, a singular building on the eastern corner of the old town square has been ‘re-gothified’ – as an example of the original architectural style of the square.

The immortalization of Mozart en Kafka

Mozart debuted his opera Le nozzle di Figaro (1786) at The Estates Theatre in Prague, circumnavigating the Viennese aristocracy who considered his latest production too controversial.

Controversial filmmaker Milos Forman was granted permission to re-enter Czechoslovakia in ’83 – after his citizenship was revoked in ’68 – to shoot the Hollywood film Amadeus. In Amadeus Prague-1 impersonates the city of Vienna.

Following the Velvet Revolution in ’89, Mozart impersonators flooded the old town square distributing flyers for dozens of Mozart inspired performances, from puppet to black light theatre; and even at the still functional Estates Theatre. Mozart himself has now become the both performer and performance, and the city rather than the theatre, has become the stage.

The other historical figure who’s image can no longer be extricated from Prague is Kafka. How his legacy has been applied to the city has become in itself Kafkaesque.

A German speaking Jew born and raised in the old town, Kafka felt deeply estranged from the place and it’s inhabitants. Later, he would utilize Prague as a backdrop in his novels, and envision the city as an alienating force that amplifies his angst.

Following the revolution in ’89, Kafka emerges as a figurative symbol of Prague – the very city he could never identify with himself. Today, Kafka’s image is everywhere; ranging from memorabilia, to cocktails, to statues, to monuments, and entire museums dedicated to his memory. Multiple tours highlighting Kafka’s life and work crisscross each other through the same city he never felt at home in.

The decor behind the Iron Curtain

At the end of the Second World War all German speaking inhabitants (one third of the population) were forced to evacuate the country. The city’s Jewish population had been murdered during the war and would never return. The communist regime filled the empty dwellings with people from the surrounding rural areas who had no connection to their new (now state owned) home, or the city they were occupying.

Manifestations of more than five people were forbidden in public space – cultural and social gatherings moved into the home. Private space and public space swapped their function.

Under communism how Prague was presented to the outside world resembled the approach of modern day North Korea. Only the facades of the most high profile landmarks were maintained. Foreigners were speedily bussed past this selection and only on occasion allowed to enter. ‘Authentic’ performances were staged in the old town square – in the form of folkloristic impressions – played by actors impersonating their own culture.

The buildings appeared pristine on the four corners surrounding the square. This was because the first three facades on each side street had been restored. If you looked more closely, the ‘real’ city began only at house number four.

Wooden ‘scaffolding’ was erected underneath the crumbling facades to protect passers-by from falling debris. This elaborate system of above ground tunnels transformed the city centre into a dark labyrinth. Because nobody painted the exterior of the houses anymore, soon the smog transformed the pastel colour scheme to grey.

‘The National Theatre is the embodiment of the will of the Czech nation for it’s national identity and independence. Collections of money among the broad masses of people facilitated its construction, and so the ceremonious laying of the foundation stone on 16 May 1868, was tantamount to an all-state political demonstration.”

Following years of repression under the House of Habsburg, half way through the nineteenth century Prague rediscovers and redefines it’s traditions, on the stage of the newly built National Theatre. The most renowned figures from Czech society help preserve and create the new national identity – characterized by the development of the Czech language, and new musical and dramatic interpretations of history. The national anthem Where is my home? was performed for the first time on the stage of the National Theatre.

In ’89 the Velvet Revolution was orchestrated from the stage of the theatre. The western press sat in the audience. Havel and Dubcek were ‘on stage’ conducting a press conference when they received news that the Communist Politburo stepped down. Shortly after, former stagehand and playwright Vaclav Havel emerged as the first president of the free Czechoslovakia.