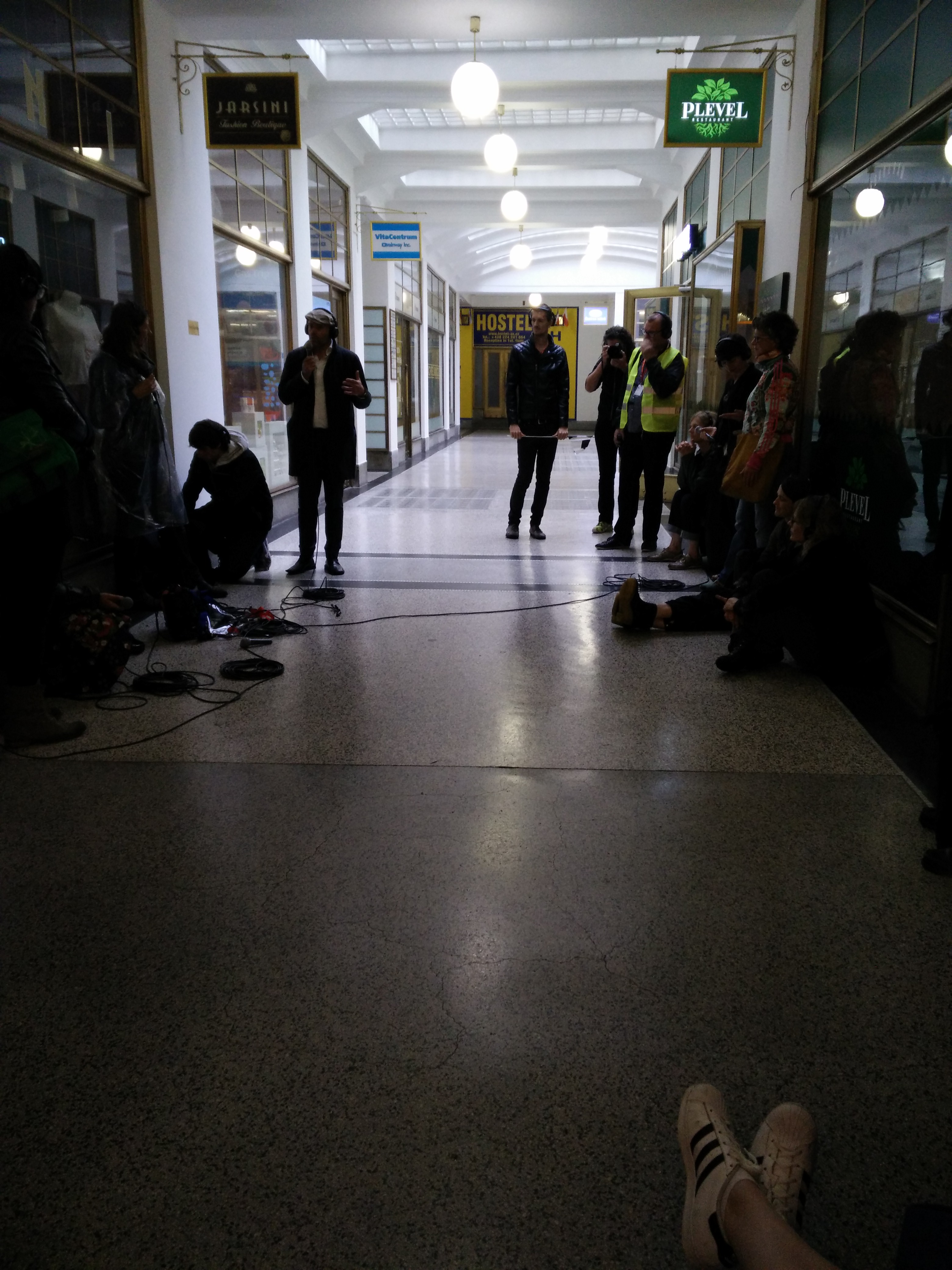 Linear setup of group on either side of the arcade

It’s raining and it looks like it’s going to continue raining. According to Vinny Jones, in Australia this usually means outdoor events are cancelled. But not the second ‘Talking in Town’ happening to be staged in the city.
People are dressed in raincoats and carry umbrellas. The plastic forms an extra layer between their bodies and the surrounding environment, insulating them from the city. But with their umbrellas the participants intrude on each other’s personal space.
It’s a compact group that sets of from beneath an arcade. Within the linear space, divided into squares by columns, the group swarms out on either side. They partially block the passageway, but leave just enough room for people to pass. Some hesitate, some walk past us determindedly.
We walk past Baroque facades that mask Gothic buildings, emphasizing the Czech nation’s makeover from independence to dependency..
We walk over  a work constructed by Markus Luescher on the Wenceslaus Square. A linear catwalk built over the top of bushes in the middle of the street. The space is more a street than a square. As you walk over the catwalk your perspective of space changes. We are being watched, but we are also looking down on others.
The talk continues, but what’s it about? It’s hard to focus, the voice in your ears transmitted by the headphones blocks other noise. But all the surrounding activity is distracting. How does the group function? What do we see around us?
The talk progresses in the rain, we hide beneath even bigger umbrellas on the terrace of a Japanese fast food chain. The waiters are not sure how to react. Because it’s raining, business is slow, but the group takes up a lot of space,  chasing away potential customers. Will the waiters wait, of will they eventually say we have to go?
A bit further on we enter a beautiful parking garage. We’re not allowed in, the guard is very strict. He directs our flock back out into the street.
What now?
Other officials are less cautious: the security guards of a department store willingly let us pass although it’s obvious we’re not planning to buy anything. Our route leads to the back entrance, another arcade in the city. Why did Walter Benjamin choose Paris for his famous book on arcades?
Another linear space, the two halves of the group facing each other on either side of a passageway leaving enough space for people to get through. We occupy public space, who dares to intrude?